Located in the northern part of the Italian Alps, the Dolomites have 18 peaks over 3,000 meters.

The site on the World Heritage List includes 141.903 hectares and is one of the most beautiful mountain scenery in the world, characterized by the presence of vertical walls, steep cliffs and long, deep valleys. The UNESCO site includes nine spectacular areas with very diverse landscapes, of great international importance for their geomorphology, glaciers and karst relief, and also as one of the best examples of preservation of carbonate platform systems of Mesozoic fossils.

The Dolomites extend over a vast area from the Val Pusteria to the Val Sugana and from the Adige river valley to the Piave Valley, occupying the territory of three provinces (Trento, Bolzano and Belluno).

These mountain groups are very different from the rest of the Alps, with wide, forested valleys - carved by the many rivers - and meadows from which the many isolated mountain massifs, formed mostly by a marine limestone called dolomite, rise almost vertically. The shape and variety of the reliefs is due to the erosive action of atmospheric agents over thousands of years, which formed towers, cracks, needles, narrow paths in the rock, accumulating residues (the so-called ghiaioni) from the corrosion at the foot of the rock walls.

80% of the Dolomites is included in the province of Belluno, the rest in the provinces of Trento and Bolzano (Bozen). The name comes from Deodat de Dolomieu, a French geologist who discovered the composition of the dolomite rock [MgCa(CO3)2] in 1791. The highest mountain is the Marmolada (3342 m).

The genesis of this type of carbonate rock begins with the accumulation of shells, corals and calcareous algae in a tropical sea environment - similar to the coral reefs of The Bahamas and eastern Australia); the process took place during the Triassic Period, about 250 million years ago, at different latitude and longitude from those of the present site, in warm, shallow seas, where hundreds of metres of sediment under their own weight lost internal fluids turning into rock. Subsequently, the clash between the European and the African plate brought out these rocks pushing them up to 3000 m above sea level. Then earthquakes, volcanoes and the erosion by the wind, rain and ice and temperature gradients changed the shape of the rocks through millions of years.

The rising movement is still an ongoing process, and in the geological future the Dolomites will continue to grow incorporating new areas of rock driven by the clash between the European and African plates - as for the Himalayas.

The main groups (identified by numbers on the map below) are: 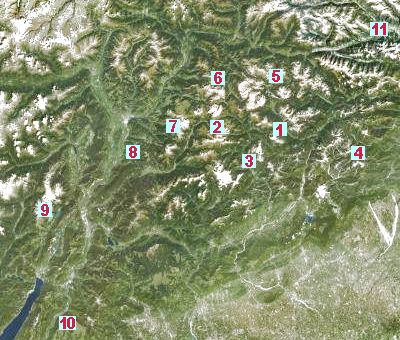