Built on of a rocky spur, unmistakable for its fairy-like shape, the castle of Saint-Pierre is really unique in its kind. The four side turrets make it resemble a Disney-like castle, though it is actually among the most ancient castles in the region. 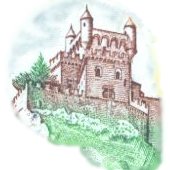 The foundation of the castle goes back to the 12th century, though its structure was deeply modified at the end of the 19th century, when merlons and the delicate corner turret were added. Nowadays it is the seat of a regional museum of natural science.

In the famous Carta delle Franchigie of 1191 there appear the names of the brothers "de castro Sancti Petri" as joint owners. Among the following lords, the most famous was Pietro Filiberto Roncas, who in the 17th century enlarged the castle and used to entertain his guests with fabulous receptions inside. From then the castle changed owners repeatedly.