Mondavio, the "mountain of the birds" (Mons Avium), an ancient Roman settlement, was in the Middle Ages ruled by the Malatesta who had here their fortress already in 1392. Mondavio is considered the greatest masterpiece of Italian military architecture in the period of transition before the adoption of the ramparted bastions. 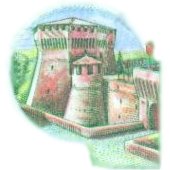 In 1474 the castle was given by Pope Sistus IV to Giovanni della Rovere (son-in-law of Federico di Montefeltro). Then a complex restoration and rebuilding around the original massive tower took place between 1482 and 1492 with a project by architect Francesco of Giorgio Martino (1439-1501) on request of Giovanni della Rovere; the resulting castle is believed one of the masterpieces of military architecture in the Renaissance.
The rule passed then to the Medici to return finally to the original owners in 1631. Finally in 1860 Mondavio was united to the kingdom of Italy, and the castle is currently the seat of a Museum of Historical Re-enactment.

The fortress appear today as a giant, complex war machine, preserved in the original form since it was never used in war. The walls are thick and follow a complex geometry aimed at retarding the impact of cannon balls and artillery, the highly sophisticated, compact inner plan allowed a small group of soldiers to hold the whole fortress.