Monte San Giorgio is a mountain in the southern Ticino canton of Switzerland, with a height of 1097 meters a.s.l., surrounded on two sides by Lake Lugano.
A section of the nearby mountains, Pravello Poncione of Arzo (1015 m) and Monte Orsa (998 m) are in Italian territory, and where added to the Unesco description in 2010. The Swiss site was inscribed in the UNESCO World Heritage List in 2003, for the extraordinary paleontological discoveries spread over five distinct fossil levels aged between 230 and 245 million years ago, which allowed to study the evolution of some plant and animal species over several million years.

Since the 19th century thousands of skeletons of dinosaurs and marine fish came to light, including some rare or even unique.

The region of Monte San Giorgio includes the towns of Meride, Tremona, Arzo, Besazio, Riva San Vitale and Brusino Arsizio in Switzerland and the municipalities of Port Lugano, Saltrio, Viggiù and Besano, all in the province of Varese, in the Italian territory.

The first publication on the fossils of Monte San Giorgio in 1854 was by E. Cornalia, who later became the director of the Museum of Natural History in Milan and from 1866 and 1878 began the first scientific excavations in the Italian area of Besano. The research continued under paleontologist and geologist Antonio Stoppani, who took the direction of the Museum of Milan in 1882. Some years later, while working for the industrial extraction of oil shale, from which "saurolo", a form of ichthyol (Ammonium bituminosulfonate used for skin diseases and as antiseptic) was obtained through cold distillation, more fossils of fish and reptiles were discovered. In 1919 paleontologist and zoologist B. Peyer started to study the area, and from 1924 until 1975 the University of Zurich conducted a campaign of fifty open-air excavations, finding a great number of fossils.

Over 200 million years ago there was on the site a 100-metre deep subtropical lagoon on whose bottom deposits of sedimentary rocks were at the origin of Monte San Giorgio. The climatic conditions of the lagoon were similar to present-day Caribbean areas, with a temperature between 22 and 25° C. Among areas of shallow water, cays and islands there were lagoons isolated from the open sea, shallow and with low oxygen levels. Deceased animals sank to the lagoon bed and were then covered with mud, and the unfavourouble environment prevented the degradation by bacteria, which explains the preservation of complete fossil skeletons.

To date over 10,000 fossil specimens have been found including 30 different species of reptiles, 80 species of fish, 100 species of invertebrates and a great number of microscopic fossils. Among the latest finds there is one of the first fossil insects worldwide of the Triassic, a 17-mm long "Mosquito" (Tintorina meridensis). Among the main findings are ichthyosaurs (large marine lizards), Placodonts and many fish as the Chondrichthyes. The presence of numerous fossils and shells such as Ammon Daonella allowed to date precisely the age limits of the area. Very precise dating of zircon minerals contained in a layer of volcanic ash (bentonite) have established an age of 241-242 million years. In more recent layers of the middle Triassic of Monte San Giorgio are fossils of reptiles and fish, however the low number of findings indicate a worsening of living conditions. In more recent limestone layers small fish, crabs, remains of plants and one Lariosaurus were found. 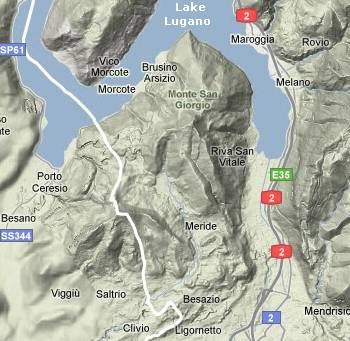 The most important fossil remains are preserved in the following museums:

How to reach it

There are a number of itineraries by car to choose from: