The name of the castle goes back to the 15th century, at the time of Francesco Sforza, who started the reconstruction from 1450, but the origin of the castle is more ancient; as a matter of fact it was built under the dominion of Galeazzo II Visconti in the second half of the 14th century. 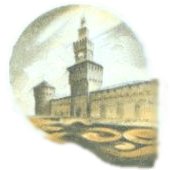 In 1499, the dukedom of Milano being disputed among the French king, the German emperor and the Sforza family, the castle was the theatre of clashes and sieges for the conquest of the city.

Within twenty years (1515-1534), a period of French dominion of Francesco I of Angoulême, successor of Lewis XII, was followed by the very short kingdom of Francesco II Sforza, second-born of the "Moro", and a short Spanish rule, after which the Sforza family regained control; in November 1534 Francesco Sforza left the dukedom to emperor Charles V.

Starting from 1549 the Spanish rulers undertook massive fortification works turning the castle into a fortified citadel.

In 1706 the Spanish dominion was replaced by the Austrians that will remain in power till 1859, when finally Lombardia was united to the kingdom of Sardinia. On that occasion the castle was attacked and ransacked by the citizens, who took away arms, furnishings, provisions and the money to pay the troops.

The spectacular palace was restored in the early 20th century to host museums and libraries.