The castle of Sirmione rises in a strategic position of great importance, between the lowland and the southern part of the lake, border territory of the Della Scala dominion and subsequently, from the beginning of the 15th century, of the Venetian republic. 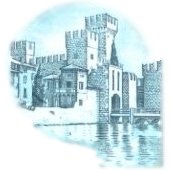 This castle allowed Sirmione to maintain the control and defense function that it had since late Roman times, and well into the 16th century, when its central role as a stronghold of the Southern banks of the Lake was taken over by Peschiera.

In the 13th century Sirmione had become one of the key points in the fortification system of the della Scala family, thanks to the construction of the castle, entirely surrounded by the waters of lake Garda, ordered probably by Mastino I della Scala. At that period it was the shelter of the patarini heretics, later in 1278 sentenced to die at the stake in Verona.

In the early 15th century it came under the rule of the Venetian republic, and followed the history of Venice until 1797, when it was given by Napoleon to Austria. The castle however remained a military garrison up to the mid-19th century.
ItalyHeritage on Facebook