Closely connected to Rome and, therefore, subject to the innumerable contrasts between papacy and empire, Ostia was repeatedly fortified and restructured during the centuries.

The city of Ostia 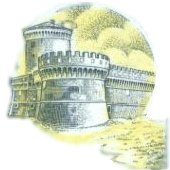 In the early 15th century, on the remains of the ancient borough, pope Martino V ordered the construction of an "excelsa turris et rotunda"; at the end of the century, on this tower the fortress was built, a symbol of Renaissance splendor, on a project by Baccio Pontelli and finished in 1487 by Giuliano da Sangallo, who was commissioned the job by Giuliano della Rovere, who later became pope as Julius II.

Subsequently the fortress was ransacked by the Lansquenets, then restored by Paul III and bombed by the Spaniards. A center of the military power for the pontiffs, it lost its importance when in 1557, following a flood, the riverbed of the Tiber was diverted away from the fortress.

The triangular plant is animated by the presence of two round towers in the corners and a tall, round central building, about 24 meters high and with a diameter of over 15 meters.

The castle is divided into a residential area and a military zone. In one of the circular towers, there is a peculiar helical staircase not supported by anything: each of the steps is integrated for one third inside the walls of the tower and discharges all its weight on the following step.