This castle, whose layout is a square plan with four round towers at the corners. consists of layers built in different periods. 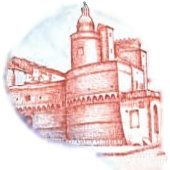 Situated in the Pudente square, it was built on the remains of a building of the 14th century, probably over an ancient Roman constructions, as shown by recent excavations. The original structure is still visible in a number of decorative details, such as a splendid double lancet window.
After the Angevin period that left deep traces in its structure, in 1427 the palace was made into a sumptuous residence by Giacomo Caldora who called from Siena architect Mariano di Jacopo, nicknamed "Taccola". At the end of the 15th century Vasto came under the dominion of Innico II D'Avalos, who took the title of Lord of Vasto. The D'Avalos family, of Spanish origin, introduced the magnificence of their court and erected a fabulous building; the city, for its beauty, was called the "Athens of Abruzzi". In 1566 the palace was set fire by Turks, led by the famed Pialy Pascià; only the outer walls of the building were not destroyed, but that same year the D'Avalos started its restoration, calling Dominican friar Valerio De Santis to direct the works.

The rebuilding involved many changes: the courtyard became more regular with the addition of an arcade, while on the eastern side a spacious terrace for the apartments of the marquises was added; in the main apartment, facing the sea, it was possible to admire, until a short while ago, the marvelous canopy of the Lords of Vasto. The sumptuous residence witnessed, according to a popular legend not supported by any historical evidence, the exercise of the "Jus noctis primae" by marquis Innico III.

In the 17th century it was used as a tribunal and prison, then restored in 1713 and 66 cannon holes were inserted as well as loopholes for fire weapons. In the 19th century the castle was used as a private mansion, and today hosts a museum and art exhibitions.

More info on the town of Vasto