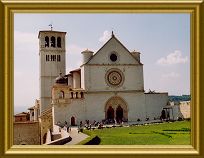 For Saint Francis, all men are brothers, rich and poor, saints and sinners, brigands and prisoners, and non-christian as well. And while medieval Christianity armed itself in crusades against the Mohammedans, he educated and armed his friars with a missionary spirit, sending them to evangelize the world. Thus, Francis appears as the ecumenical prophet of the Church, teaching not to conquer, but to communicate in freedom the salvific love of Christ. 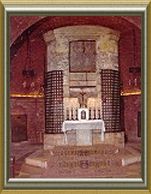 Rising on the lowest slope of Mount Subasio, by the will of Pope Gregory IX and of Friar Elias, the double Basilica expresses in the concatened articulation of its architectonic masses, the determination of making eternal through the centuries, the figure and message of St. Francis. On the romanesque framework of the lower basilica (c. 1232-1230) the tomb Church destined to guard the remains of the little poor man, was contructed the upper basilica (1232-1239) which, in the ascensional motif of its arches, presents itself as the "exemplary type of Italian Gothic" (J. V. Schlosser) and "the most beautiful house of prayer" (A. Venturi)

With the help of a speaking-English local friar, we'll visit the magnificent double Basilica of San Francesco, with lively worldwide known sequences of frescoes by Giotto, Cimabue, Giotto, Pietro Lorenzetti and Simone Martini. Assisi is known as the city of Peace and the ecumenical meeting place of the world's religions. Its medieval aspect, with the typical white and pink stone has remained intact in the centuries. Visitors to Assisi can perceive the intensity of the Franciscan spirituality and that of the other great saints who have blessed this land.

In Assisi even the sun, moon, stars, fire, water and wind feel at home because Francis dared to call them "brothers" and "sisters". "Before Francis, the unity of the divine plan of creation loses the veil that hides it to other mortals. Francis contemplates nature with the stupefied and reverent eyes which the first man saw on that first radiant morning of the world..." (O. Englebert).
After the Basilica, we'll have time to visit other wonderful places in the town, among which stand the Basilica of St. Clare (13th cent.), the Piazza del Comune and the nearby Basilica of St. Mary of the Angels (16th-17th cent.), built around the "Porziuncola", a small church nucleus of the first Franciscan community. Either before or after a traditional lunch in a local central restaurant, there will be time for shopping and strolling in the town center around the many typical souvenires stores.