Ascoli Piceno, in the South of Marche, rises where the Castellano stream flows into the Tronto river.
An ancient town of the Sabini (a branch of the Piceni stock, that populated the Adriatic side of the Italian peninsula), was later an important Roman city with the name of Ausculum and a flourishing Renaissance center. Under the Lombards it was part of the Dukedom of Spoleto, then was an independent "Comune" up to 1502, when it was included in the State of the Church, and in 1860 became part of the newly founded Kingdom of Italy. 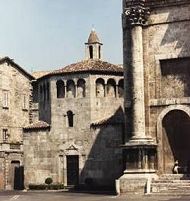 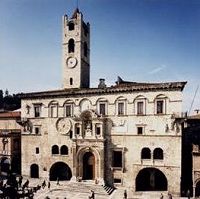 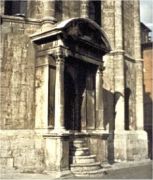 > The best starting point for a visit is Piazza del Popolo, the true center of the city life; after an unforgettable stop at the liberty-styled Caffè Meletti to taste the celebrated "anisetta" liquor, it is possible to admire the magnificent Renaissance Palazzo dei Capitani, see the Loggia dei Mercanti and the Church of San Francesco with the two fine cloisters once belonging to the ancient monastery.

In beautiful Piazza Arringo, where the Forum rose in Roman times, there is the Pinacoteca Civica, one of the richest collection of religious art in Italy including works by Cola dell'Amatrice, Carlo Crivelli, Titian and Guido Reni. In the same square the Duomo dedicated to St Emidio, Patron of Ascoli and deeply worshipped all over central Italy as a protector against earthquakes, which hosts a precious polyptich, a masterpiece by Carlo Crivelli and a silver altar piece in 27 tiles representing Christ's life.

Another important stop can be made in the Archeological museum, one of the richest in Italy for the Picenian culture. But also just strolling along the streets of the center will offer a unique atmosphere of Renaissance palaces and medieval churches built on previous pagan altars, testimonials of a lively past rich of culture and achievements; truly impressive is also the small church of Sant'Emidio alle Grotte, an early Christian place of worship, where many martyrs including patron Sant'Emidio were buried at the time of the Roman persecutions against the Christians.


The traditional cuisine is simple but tasty, joins mountain and sea in the many recipes based on truffle and fish - the "brodetto all'anconetana", served on toasted bread, or the "sarde alla marchigiana", deliciously baked in oil, rosemary and breadcrusts; the world-renowned, deliciously stuffed "ascolana" olives (made with very big olives grown only in the Ascoli area), the "vincisgrassi", a lasagna typical of Marche based on hand-made pasta, ragout sauce and parmesan, the "caciuni" cakes, kind of sweet baked ravioli filled with ricotta.

And good companions are the wines, the rich Sangiovese, the Verdicchio and Cabernet, the renowned montepulciano variety called "Rosso Conero" or the delicate Bianchello del Metauro or Falerio.