Tivoli lies some 30 km from Rome: it is a town of great antiquity, full of interesting reminders of its past, first and foremost Hadrian's Villa and Villa d'Este.

Villa d'Este, famous especially for its garden and the many and the many fountains with which it is embellished, was magnificently built and restored on the ruins of a Roman Villa by Pirro Ligorio in 1550, on commission on governor at the time (Ippolito d'Este). After various vicissitudes it became the property of Austria, was returned to the Italians in 1918, then restored before the monumental part and the immense park were opened to the public. The garden consists of two distincts parts joined by three large fishponds and by the Fountain of Neptune. 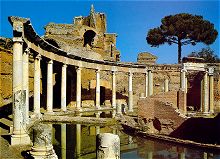 On the outskirts of Tivoli stands the magnificent Villa Adriana, the sumptuous residence of Emperor Hadrian, which gives the visitor an exceptional idea of Roman architecture and statuary and is one of the finest examples of an imperial residence. This emperor's gifts as an architect can be seen in the series of palaces, baths, theatres eetc. Which he had built there between 118 and 134, and which were meant to remind him, here in Italy, of the places he most loved in Greece and the Near East.

The Villa was visited and studied by famous people (Pope Pius II, Pirro Ligorio) and excavations were carried out particularly in the 18th century. Bought by the Italian government in 1870, the villa was restored and some of works of art from the site can also be seen in the Museo Nazionale Romano. The monuments include Stoà Poikile (commonly called Pecile) and the Naval Theatre, the Small Thermae and the Great Thermae, the Canpus (with obvious reference to the sanctuary in Egypt), the Museum (with the precious objects found in the excavations, including a copy of the Amazon by Phidias), and lastly the Emperor's Palace subdivided into three blocks and aptly described as a "city in the shape of a palace".