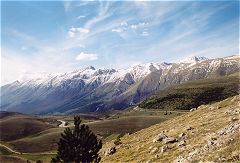 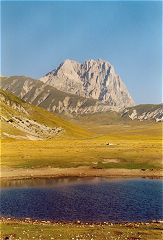 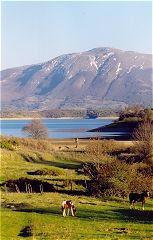 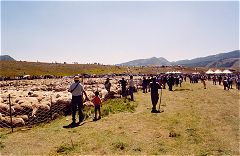 The area is nowadays part of the National Park of the Gran Sasso and Laga, founded in 1992, the second in Italy for width, with mountains all over 2000 meters At the shadow of the Corno Grande, the Gran Sasso's highest peak, lies an hotel where Mussolini was imprisoned in 1943 before being rescued by the Germans. Campo Imperatore, a plateau at the average height of 1800 meters above sea level in the heart of the Gran Sasso group, offers an extremely valuable patrimony of fauna and vegetation.

The fauna is rather varied and is represented by uncommon species, such as the Apennine Wolf, the Wild Cat, and wild boars, squirrels, foxes, all quite widespread; more unusual are the Chamois, only lately brought back in the area. Among the predatory birds we point out the buzzard, the peregrine, the sparrowhawk and the Golden eagle; among the wood birds: the great spotted woodpecker, the woodpigeon, the short toed treecreeper; among the rocky species: the alpine chough, the chough, the wallcreeper; in the heights, the alpine accentor and the water and rock pipits. The amphibians are also common with three species of newt, the paddled salamander and the Italian new.

The woods are essentially made up of beech along with, even though more rarely, holly, maples of different species, mountain and fowler sorbs, cherry trees, wild apple and pear trees, yew trees. A special mention must be made of the small woods of white fir trees (Selva di Cortino, Bosco Martese ) remainders of the old mixed gathering of fir trees and beeches of the Apennine.

The undergrowth is crowded with a large number of anemone, ranunculi, red lilies and martagons, with belladonna, raspberry bushes and many species more; the glades are brightened up by the colours of the different species of wild orchids while the high grasslands are characterized by the presence of a moorland of black bilberry. On the Laga there are also large extensions of chestnut woods, quite unusual in our region.

In summer the pastures are the home of cattle and sheep, according to the traditional pastoral system called transhumance. The tradition was already recorded in the 1st century BC, and established a strong connection with the population of Apulia.

The shepherds that occupied Campo Imperatore from 15 june to 15 october are mostly from Manfredonia and Foggia. Abruzzo, Molise and Apulia have seen for thousands of years shepherds with their flocks moving south and back north according to the season. Each year, since time immemorial, millions of sheep, thousands of shepherds, moved in early autumn from the mountain pastures of Abruzzo to the wide plains of Apulia to come back in late spring, with the melting of snows, to the green ancestral land.

The age-old practice of transhumance still marks the economy of inner Abruzzo, and has exerted an enormous historical and cultural influence on the character, lifestyle and traditions of the Abruzzese and Molisani. In the 3rd century BC shepherds are already recorded as following the Roman roads, and they continued for thousands of years until the late 19th century, when with the railway system and industrial revolution, the pastoral economy finally declined, leaving the mountain population without the support of an age-old, stable economy system. And many, after the yearly migration, were obliged to emigrate forever.