On the top of a 3-pointed hill hovering on the Adriatic with the majestic Gran Sasso in the background, in a key position above the Val Vomano, the town was famous and powerful in antiquity and is today one of the most important historical, cultural and artistic centres in Abruzzo. The surrounding landscape is also impressive for the canyon-like calanques and the partly-unexplored caves. 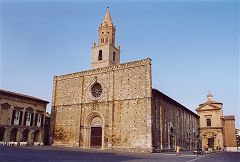 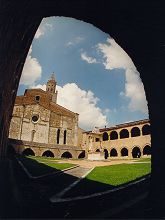 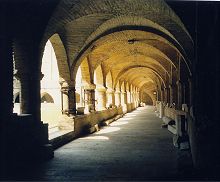 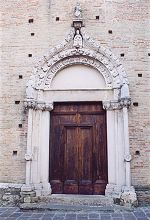 Hatria was a Roman colony from which many historians also derive the name of the Adriatic Sea. According to Strabo, it was founded by the Sabini, which is proved also by the remains of an early Iron-Age settlement on the Colle Maraldo di Atri and the necropolis at La Pretara and Colle della Giustizia.

In the VI century BC the town was one of the four major Greek harbors in the Adriatic Sea. In 290 it was conquered by Rome. After the fall of the Roman empire, the territory came under the power of the Lombards (VI century A.D.) and was annexed to the Duchy of Spoleto. Then the Normans came, and in 1393 Atri was bought by the House of Acquaviva, under whose power a period of great splendor for the city began. At the end of the XVIII century it was given by the Acquaviva to the Kingdom of Naples.

The most important monuments of Atri are the Cathedral of Santa Maria Assunta (late XII century); Palazzo Ducale (Acquaviva), a fortress built in the highest point of the town, now the seat of the municipality; the Medieval walls with Porta Macelli and Porta S.Domenico; Museo Capitolare, Church of San Francesco, with a beautiful Baroque flight of stairs and Church of San Domenico, with two fine paintings by Giacomo Farelli (XVII century)


Andrea de Litio (also spelt Delitio), one of the greatest Abruzzese painters, achieved a wonderful fusion of native and international elements. He painted frescoes in many parts of Abruzzo, and some of his paintings are in museums as far as Baltimore and New York. His acknoledged masterpiece is the fresco cycle in the Cathedral of Atri. Very little is known on his life. He must have been born about 1420, and for long time his place of birth was uncertain: da Lecce in Apulia, Guardiagrele, Sulmona, Atri. But the presence in Marsica of two juvenile works, led scholars to believe he was from Lecce Vecchia, called in Lombard times Litium, which after the 1915 earthquake was abandoned when the population rebuilt their village, now Lecce dei Marsi, down in the plain. 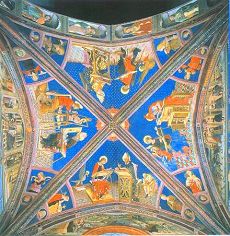 At the time this area of Abruzzo was poor, afflicted by periodical famine, devastated by earthquakes and invading armies. A landscape of valleys and mountains, which Andrea De Litio about 1440 left for Umbria and Tuscany, where his artistic personality could better develop. Decades later he returned to the other Abruzzo along the coast, where he left the great works of his maturity. He was again in Abruzzo in 1473, when he signed and dated the giant San Cristoforo on the outer wall of Santa Maria Maggiore, Guardiagrele, and in 1480 he was working on his masterpiece in Atri.