Mazzamuriello and other Italian elves

The Mazzamurello is a whimsical fantasy creature of the Italian fairy-folk tradition, that scares bad people but is generous with good ones. This Italian goblin is known under different names in the various parts of Italy: "mazzamauriello" in Naples, "scazzamauriello" in Apulia, "mazzamureddo" in Sicily, "mazzamarelle" in Lanciano, "mazzamurigli" in Alatri, "mazzariol" at Pieve di Cadore, "mazapegol" in Emilia, "mazzarot" in Triveneto.

The term "Mazzamurello" may be derived from "killing Moors" in analogy with the Spanish creature known as "matamoros". It belongs to the "Little People" (Sidhe, in Gaelic), that is all those fairy creatures (such as those in J. R. R. Tolkien's Middle-earth) that make up the fairytale imagery of European folk traditions. 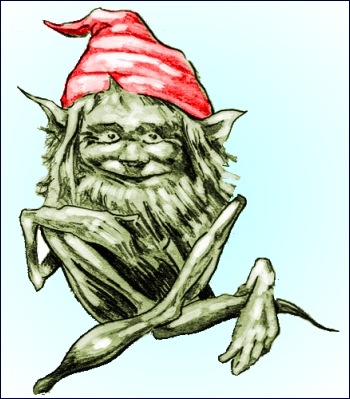 The Mazzamurello can be seen as the Italian version of the Irish leprechaun, the English brownie, the German kobold, the Scandinavian tomte, the Icelandic jólasveinarnir (=Yule Lad). It is similar to the Welsh Robin Goodfellow, called "pwca" and made famous by William Shakespeare as Puck in "A Midsummer Night's Dream".

Well hidden in the branches of trees, this small spirit seems to owe its name to the bad habit of hitting walls, even in the city. In Rome, in central Trastevere, a now demolished building was known for having hosted some restless mazzamurelli that by night made their presence heard all over the area. Still today, to remind of their presence, exactly where the palace stood, a plaque on an alley has their name "Vicolo di Mazzamurelli". 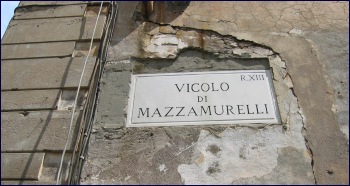 In a small village in Abruzzo an adventure park was recently opened bearing their name: "Il Regno dei Mazzamurelli".

A Mazzamurello signals his presence to the inhabitants of the house by making noises. Its presence may indicate the proximity of a treasure, an imminent danger to one of the residents, or a message of a deceased loved one trying to communicate with the living. Like other mythological creatures, Mazzamurelli are in fact traditionally considered as messengers between the ordinary, earthly world and the magical world beyond.

The poet and writer Gabriele D'Annunzio from Abruzzo mentions the sprite joker in letters to his wife several times. About the Mazzamurello, adept at making objects disappear, D'Annunzio wrote: "He had its hiding place in the coal cellar of my father's house and, since childhood, had me at its mercy" (in "Libro Segreto"). And, explaining why he did not devote more than two minutes to the search of any object he could not find, the poet commented "in any case, the Mazzamaurello will put it back in place when he feels like it" (in "Il secondo amante di Lucrezia Buti").

A cousin of the Mazzamuriello in southern Italy is the "Monaciello": mostly benign, the monacielli have the appearance of small hooded beings (= small monks). In Naples there is a legend about the birth of the myth of monacielli: in 1629 a rich Neapolitan gentleman gave order to build a new aqueduct by reusing tuff canals dating back to the 4th century BC, the so-called "underground Naples", which extends for about 10,000 square meters under the city. The workers (called "pozzari"), as a protection against wetness, used to wear long, dark cloaks and helmets. 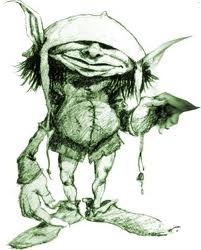 Sometimes, during their work, they would climb up in the courtyards of houses, and valuables might disappear. When the residents took notice of thefts, they thought the culprits were those strange beings emerging from underground, wrapped in cloaks and helmets similar to friars' hoods.

Another source, however, documents the existence of the legend in even earlier times: in 1578 a law on Neapolitan rents, "Pragmatic de locto et conduco", stated that if a lessee was attacked by a Monaciello, he could leave the house without paying rent. According to legends from Basilicata, the "monacielli" would be children who had died without baptism.

In Apulia a sprite with magical powers is called Scazzamauriello (U scazzamauredd), etymologically "ruining walls", because it can get into houses through keyholes. It prefers the night, and loves to sit on the chest of people sleeping or on the shoulders of those sitting or standing. The victim becomes aware of its presence due to the heavy weight, but cannot move; he vainly cries for help, but no one can see the Scazzamauriello, which is capable of paralyzing its victims.

This whimsical elf is kind to girls, and protects them from the oppression of stepmothers and masters, often doing the housework in their place. He loves children too, and gives them sweets and coins.

Legend has it that if you manage to steal its red hood from a Scazzamuriello's head, the creature, in order to have it back, is willing to deliver a pot full of gold coins and then be gone forever. That's why once peasants justified the sudden wealth of someone by saying, "That one caught a Scazzamauriello".