Easter Monday, or "Lunedì dell'Angelo" commemorates an episode in the Gospels. The tradition then moved these events from Easter morning to the next day (Monday), perhaps because the Gospels indicate "the day after Easter", though obviously that was the Jewish Easter, which fell on a Saturday.

The story in the Gospel 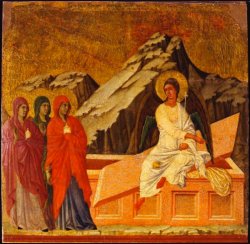 Mary Magdalene, Mary the mother of James and Joseph, and Salome went to the tomb where Jesus was buried, with aromatic oils to embalm the body. Once there, they found the great stone that closed the entrance removed; the three women were lost and worried and tried to understand what had happened, when an angel appeared to them and said: "Do not be afraid, for I know that ye seek Jesus who was crucified. He is not here! He is risen as he said, come and see the place where the Lord lay" And the Angel added: "Now go and tell the news to the Apostles," and they rushed to tell what happened to the others.(Mk 16.1 to 7).

In Italy Easter Monday, also called "Pasquetta" is a public holiday, introduced by the Italian government after WW2, to extend the feast of Easter, as was the case for December 26th, the day after Christmas.

The day is usually spent with family or friends, with a traditional trip or picnic, and outdoor activities. One interpretation of this tradition may be that it commemorated the episode of the disciples traveling to Emmaus. Indeed, on the day of the Resurrection, Jesus appeared to two disciples on the road to Emmaus, a few kilometers from Jerusalem: therefore, on Easter Monday, taking a walk "fuori porta" (="outside the walls" or "out of town") became customary.

There are different traditions that developed in different regions. From countryside festivals to the blessings of vehicles, art contests or food eaters competitions.Inspired by ancient farming traditions are celebrations involving hard-boiled eggs. For example at Fiorenzuola d'Arda (PC) a skill game is held where the two contenders must try to break their opponent's egg hitting it with the tip of their own, which instead must remain intact.

During the "Pasquetta" picnic, the secret is the menu, which must be colorful, tasty, rich and light, with eggs as a basic ingredient: therefore cold dishes, pancakes, pies, salads, pork cured products and cheese fill the wicker basket, together with a good wine and a traditional dessert. A traditional Neapolitan basket would include casatiello, macaroni omelette, sausage, boiled eggs, roasted artichokes and, of course, a pastiera!