San Gennaro is patron saint of Naples, in whose cathedral two ampoules are preserved with a liquid in the solid state, which tradition says was the saint's blood, and that melts three times a year. The name Gennaro is widespread in Campania and goes back to the Latin "Ianuarius" which means "consecrated to the god Janus", generally given to children born in January, the month sacred to the god. His first name was actually Procolus, belonging to the gens (family) Ianuaria.
Follow ItalyHeritage on Facebook

San Gennaro (Ianuarius) was born around 272 AD, near Benevento. the events that led to his consecration took place in the fourth century, during the persecution of Christians by Emperor Diocletian. [Below, the 1607 painting "San Gennaro mostra le sue reliquie" by Michelangelo Merisi da Caravaggio, oil on canvas, (cm 126,5x92,5), New York, Morton B. Harris collection]. Gennaro was the Bishop of Benevento and paid a visit to the faithful in Pozzuoli. The deacon of the place was arrested along the way by order of persecutor Dragontius and Gennaro went to visit the prisoner, but, having interceded for his release, he was arrested and sentenced to be thrown to the lions. The next day, however, due to the absence of the governor himself, or because the latter realized that the people showed sympathy for the convicted, Gennaro's punishment was suspended.

According to tradition, however, the punishment was changed because of a miracle: the lions knelt before the condemned, after a blessing made by Gennaro. Dragontius then commanded that Gennaro and his companions were to be beheaded: the sentence was executed on 19 September, 305 AD. 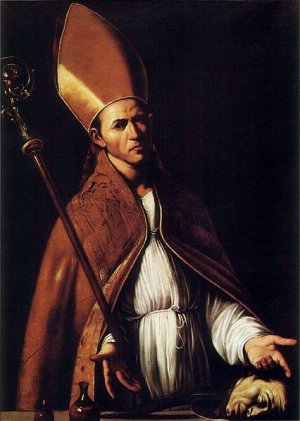 In the Vatican Acts many mythical episodes are narrated. While Gennaro was going to Nola, where he was to meet the evil judge Timoteus, he was surprised while proselytizing, and was imprisoned and tortured. Since the terrible tortures didn't cause any effect, Timoteus threw him into a fiery furnace; once the furnace was reopened, Gennaro came out unharmed and the flames engulfed the pagans who had come to witness the execution.

Another story is about Timoteus: being ill, he was healed by Gennaro, but despite this he showed no gratitude and ordered the bishop to be brought into the amphitheatre of Pozzuoli, to be given to wild beasts. During the journey to the site of the execution, a beggar asked Gennaro a flap of his garment. Gennaro said that, after his execution, the beggar could take the scarf with which he was to be blindfolded.

According to tradition, after Gennaro's beheading, blood was collected by a pious woman, one Eusebia, who enclosed it inside two ampoules; these became a typical iconographic symbol of San Gennaro.

Liquefaction of the Blood

According to tradition, the blood of San Gennaro melt for the first time when bishop Severus moved the saint's remains from Agro Marciano to Naples. On the way he met the pious woman with the two ampoules of the saint's blood: at the presence of the saint's head, the blood would melt. In 1389 there was a huge procession to witness the miracle: the liquid stored in the ampoules melted "as if the same day it flowed out of the saint's body." Today the ampoules are kept in a safe behind the altar of the Chapel of the Treasure of San Gennaro. Of the two vials, one is half-empty because part of its content was subtracted by King Charles III Bourbon, who took it to Spain. Three times a year, the faithful rush to witness the liquefaction of the blood. 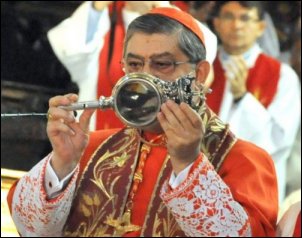 Feast of San Gennaro in Naples

The Feast of San Gennaro, the patron saint and protector of the city of Naples, is celebrated every year on September 19. During the day, the vials are exposed to the public and the blood contained in them becomes liquid among the prayers of the faithful. A quick liquefaction is considered a sign of good luck while its delay or failure are taken as negative omens. The event is also replicated on December 16 and the first Sunday in May.

Every year, all city officials attend the ceremony, including the mayor, the president of the province of Naples and the President of the Campania region. The celebration follows a well-defined program:

According to legend, the blood of San Gennaro liquefied for the first time in the fourth century A.D. during the transfer of the saint's remains to Naples, but the first documented report of yje ampoule containing the blood relic dates only from 1389. The Chronicon Siculum mentioned that during the celebrations for the feast of the Assumption, there was a public display of the phials containing the "blood of San Gennaro" and on 17 August, during the procession, the liquid in the ampoule melted.

The Church is skeptical, but always refused to allow taking samples of the liquid - arguing that an invasive analysis may damage both the ampoule and the blood; actually the Second Vatican Council decided to remove from the calendar several saints, including San Gennaro; but popular resistance was so strong that it was decided to keep the cult of the relic, pointing out that the liquefaction of the blood of San Gennaro could not be considered a miracle by the church, but an event that cannot be explained but deemed miraculous by the population.

As a matter of fact, there may exist a physical explanation, thixotropy: some materials, called thixotropic, become more fluid when subjected to mechanical stress, such as small shocks or vibrations, returning to the previous state if left undisturbed. An example is the ketchup sauce that is in a solid state until shaken, when it becomes much more liquid.

Three Italian scientists, Garlaschelli, Ramaccini and Della Sala, produced a suspension having a thixotropic behavior very similar to the fluid of San Gennaro (A Thixotropic mixture like the blood of Saint Januarius, "Nature", vol.353, 10 oct 1991). The three researchers (who used substances available at the end of the 14th century) with ferric chloride (in the form of molisite, a typical mineral of volcanic areas and present in Mount Vesuvius), calcium carbonate (egg shells are approximately 94% calcium carbonate), sodium chloride (common salt) and water, obtained a red colloidal solution with thixotropic properties.

One objection is that not always the blood liquefied, but this has its answer in the very thixotropic properties of the materials: if shaken gently, there is no liquefaction (after all, the blood of San Gennaro liquefied also outside of the canonical periods).

Another, stronger objection is that the gel of the three researchers loses its thixotropic properties after 2 years: but, as noted by Garlaschelli, some gel samples may last a decade, and it may depend on the concentration of the ingredients or on the sealing method.

Anyway, what is certain is that Neapolitans will continue to believe, to wait for the liquefaction of the blood of San Gennaro, and to draw from the event auspices on the future of the city.

Feast of San Gennaro in the United States

The Feast of San Gennaro is a fair held in mid-September in Little Italy, New York. The heart of the festival is in Mulberry Street, and is characterized by parades, games and the typical sellers of sausages and donuts. The celebration begins with a religious procession that starts from the oldest church in the Italian neighbourhood. At the same time, a similar festival begins in the Italian neighbourhood in the Bronx. The festivities begin early in the morning and continue until late at night, ending 11 days later.