The name "Addolorata" was very common in Southern Italy, as well as in Spain its variation "Dolores", both derived from the celebration on September 15 of the Blessed Virgin Mary of Sorrows. 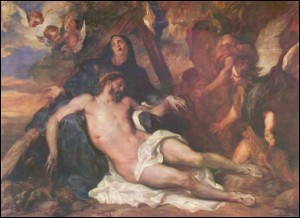 A number of passages in the Gospels describe seven sorrows that Mary had to endure during her life.
Surely to see the death of a child is a mother's greatest pain, there are no words that can give consolation, it's against the natural order of life, and having to witness an innocent son tortured and horribly killed in front of her eyes is unimaginable, only mothers who had to experience something similar in their lives can understand the devastating pain of such an experience.

The origins of the devotion to the Virgin of Sorrows started after 1050, a time when there were already liturgical celebrations referring to five joys of the Virgin Mary and five sorrows, represented by five swords stuck in her heart. The cult had spread all over Christendom by the end of the 12th century. An exact date for the celebrations in honor of Blessed Virgin Mary of Sorrows is 1233, when seven noble citizens of Florence wanted to celebrate their devotion singing hymns before the image of the Virgin Mary. The tradition reports that the Virgin Mary appeared, dressed in black, because of the bloody civil strife at that time in Florence.

At that apparition the armed men threw down their weapons, the seven men who had seen the Virgin Mary retreated in penance and prayer on Mount Sanario, and established a religious order, called "Servi di Maria", which was recognized by the Church of Rome in 1304. From then on, the feast of Our Lady of Sorrows spread very rapidly in every area of Europe.

The celebration of the Seven Sorrows of Mary was approved in 1714 by the Sacred Congregation for the Friday before Palm Sunday, then on 1814 was moved to the third Sunday in September, and finally Pope Pius X (1904-1914) fixed the final date of 15 September, immediately after the celebration of the Exaltation of the Cross (14 September). The cult is very lively, especially in the vicinity of Marian Shrines, and represented with statues, ceramics, wooden sculptures, frescoes.

In many churches in towns and villages there is a statue of Mary dressed in black, with a sword or seven swords piercing her heart, and these statues are often carried in processions, which in some places draw crowds of tourists for their spectacular elements, as the Baroque procession in Seville.

The subject of the Sorrowful Virgin inspired also musicians, writers and artists. The anonymous "Liber de passione Christi et dolore et planctu Matris eius" started a literature on the subiect, among the many works of this kind is the celebrated 'Stabat Mater', written in Latin by Jacopone from Todi.