A virgin hermit of the 12th century, St. Rosalia became the patron saint of Palermo in 1666, with the official worship extended to the whole of Sicily. In Sicily there is a deep-felt worship for three young virgin saints, Lucia of Syracuse, Agata of Catania and Rosalia patron of Palermo. Their devotion has spread wherever hosts of Sicilian immigrants went, bringing along the memories of the three saints as reminders of their native island and traditions.

"Santuzza", as St. Rosalia is affectionately called in Palermo, emerged as one of the best known and most venerated saints in Christianity, especially in Sicily; still today, anywhere in the world, the people from Palermo exchange the greeting "Viva Palermo e Santa Rosalia."

The daughter of a noble lord, Rosalia Sinibaldi lived in that happy period of Christian renewal, that the Norman kings re-established in Sicily, after expelling the Arabs that had occupied the island from 827 to 1072. The period saw a great spread of Basilian and Benedictine monasteries, and in this atmosphere the young girl left court life and retired in prayer into a cave on Mount Pellegrino, where, according to ancient liturgical books,she died on Sept. 4, 1160 at the age of 35.

The tradition says that her father Duke Sinibaldo, lord of Quisquinia and Monte delle Rose, located between Bivona and Frizzi, in the Palermo area, and her mother was Mary Guiscarda, cousin of the Norman king Roger II; very young, she was called to the Norman Palace, to the court of queen Margaret, wife of William I of Sicily (1154-1166), and her beauty attracted the admiration of noble knights, her most ardent suitor, according to popular tradition, was Baudouin, the future king of Jerusalem.

But the young girl felt a very strong eremitical vocation. Following the example of anchorites, who left the comforts and active life retreated to a cave or in a cell, usually near a church or a convent, so Rosalia retreated to a cave in the paternal feud of Quisquinia about 20 km. from the Madonie, close to a Benedictine monastery. From there, the young hermit, after a period of penance, moved into a cave on Monte Pellegrino, a beautiful promontory near Palermo, next to a pre-existing Byzantine church, in a cell built over a stil extant well.

The Benedictines of the monastery were able to follow and be witnesses to the life of Rosalia, who lived in prayer, solitude and penance; many local people climbed the mountain attracted by her reputation for holiness.

According to the tradition, she died on September 4, probably in the year 1160. Her worship spread with the building of churches dedicated to her in various areas of Sicily, as well as a chapel already on Monte Pellegrino, whose image is reproduced in the Cathedrals of Palermo and Monreale; a church was built also as far as Rivello, province of Potenza.

On Monte Pellegrino her followers, the so-called "hermits of St. Rosalia" lived in solitude up to the early 16th century, dwelling in caves close to that where the young hermit lived and died. Towards the mid-16th century viceroy John Medina built a convent next to the church that included the cave, for the "Reformed Franciscan Order of Santa Rosalia and Monte Pellegrino".

The events of the plague years

In the early 17th century Rosalia's worship was almost forgotten. On 26 May 1624 a dying woman, Girolama Gatti, saw in a dream a young, white-clothed girl, who promised she would be healed if she made a vow to climb Mount Pellegrino to thank her. The still feverish woman went up the mountain with two friends, drank the water dripping from the cave, felt she was healed and fell into a restful sleep, dreaming again of the young girl dressed in white, who pointed to her the place where her remains were buried.

The event was reported to the nearby convent of the Franciscan hermit friars, who during the previous century with their Father Sueprior Benedetto il Moro (1526-1589) had tried unsuccessfully to find Rosalia's relics. Now they resumed their search, and on 15 July 1624, four feet deep, they found a boulder, six palms long and three wide, to which human bones were attached.

By order of cardinal Giannettino Doria, the archbishop of Palermo, the boulder was moved into his private chapel, where the remains were examined by theologians and doctors; the result was disappointing, the team stated that the bones might belong to more bodies and none of the three skulls found seemed to belong to a woman.

The cardinal was not convinced and appointed a second committee. Meanwhile in the summer of 1624 Palermo was hit by a plague, that began to claim thousands of victims. The Cardinal gathered authorities and the population in the cathedral, and all together they prayed the Virgin Mary, vowing to defend the privilege of the Immaculate Conception, which just then was being greatly debated in the Church, and at the same time he vowed to declare Santa Rosalia patron of Palermo, and to worship her relics, in case they could be established.

Another strange event had happened in the same period. On 25 April 1624 two masons from Palermo, at work in the Dominican monastery of Santo Stefano, discovered in a cave at Quisquinia a Latin inscription, until then unknown to all, which was believed engraved by Santa Rosalia herself during her life. The inscription read: "I Rosalia, daughter of Sinibaldo, lord of Quisquina and (Mount) of the Roses, for the sake of my Lord Jesus Christ, decided to live in this cave"; this inscription confirmed the site of her previous hermitage, from where she had later moved to Monte Pellegrino.

On February 11, 1625 the second expert team determined that the bones clearly belonged to one female person, and about the three skulls they discovered that two were a clay jug and a big stone, while the third one, that at first looked too big, was thickened by limestone deposits, which once removed revealed a female skull; also the first team re-examined the remains and agreed with the result of this second committee.

The miracle on Monte Pellegrino

Another event which was deemed a miracle took place a little afterwards: a man named Vincenzo Bonelli, having his wife died of the plague and not having denounced the disease, fled onto Monte Pellegrino and here Santa Rosalia appeared to him, foretelling his death by plague and ordering him, if he wanted his soul to be saved, to tell the Cardinal not to doubt about the authenticity of the relics any more and to carry her bones in procession through the city, so that the plague would end.

Back in town, Bonelli fell ill with plague and before he died he confessed the Cardinal what he had been revealed. On 9 June 1625 an urn with the relics was carried in procession with great solemnity and the participation of the entire population. Wherever the saint's remains were passing, the sick were healed, and the city was purified in a few days; since then, in Palermo, the procession is repeated every year. The plague began to regress and on the enxt July 15, when a pilgrimage was made to Mount Pellegrino on the anniversary of the discovery of the relics, there was no case of plague any longer.

The Cardinal built inside the Cathedral of Palermo a magnificent altar, where the fine solid silver urn with the relics of the saint was placed; her name was traditionally interpreted as consisting of 'rose' and 'lily', symbols of purity and mystical union, which is why "Santuzza" is represented with her head surrounded by roses.

Since that year 1625 the worship of the prayerful, contemplative virgin hermit was authorized by the Church of Palermo, and over the centuries has never been forgotten by the people of the Sicilian city. At first the pathway up to Monte Pellegrino was difficult, then the Senate of Palermo built in 1725 a fine road among pines and eucalyptus. Two holidays in honor of St. Rosalia were established in 1630 by Pope Urban VIII, who included the saint in the Roman Martyrology: July 15, the anniversary of the discovery of the relics, and September 4th, the day of her death; the celebrations in July go on for a week, with the participation of all the people and the many emigrants who return for the occasion.

The statue of "Santuzza" surrounded by other statues, stands on top of the so-called 'machine', which is a chariot shaped like a boat on which there is also a band; this chariot is transported through the city for the event called "fistinu". On the 4th of September a pilgrimage takes place to the shrine on Mount Pellegrino, where the cave is today inside a shrine with a picturesque, 17th century facade; inside the shrine many works of art have been added during the centuries.

A gate divides the first part of the sanctuary from the cave; on the site where the relics were found is a beautiful altar covered by a canopy, with a sumptuous tabernacle surmounted by a silver statue of the saint, donated by the Senate of Palermo in 1667. Under the altar is a statue of 1625, representing St. Rosalia exhaling her last breathing; the statue was covered with gold by order of King Charles III of Bourbon (1716-1788).

The cave up in the mountain was visited not only by innumerable anonymous pilgrims, but also by many distinguished visitors as princes, kings, emperors, writers, poets, musicians, artists; among them also Goethe went up the mountain, which he called in his Italian Journey, the "most beautiful promontory in the world". Below a view of Monte Pellegrino from the harbor, in a painting by Martinus Rorbye (1803-1848), oil on canvas, presently at the Los Angeles County Museum of Art (LACMA), Los Angeles, CA, USA. 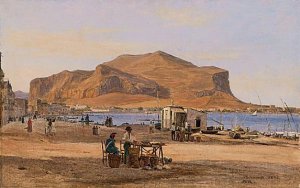 Shortly after the discovery of the relics of St. Rosalia on July 15, 1624, the saint was made city's patron and Flemish painter Antoon van Dyck (1599 - 1641) was commissioned some paintings on her honor. Below is "Santa Rosalia crowned by angels", presently in the Galleria Regionale della Sicilia, Palazzo Abatellis, Palermo. 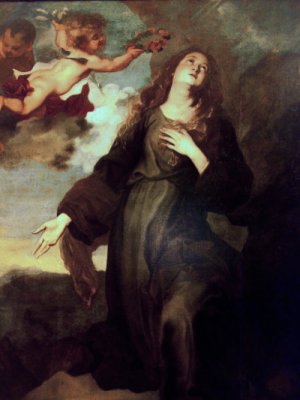 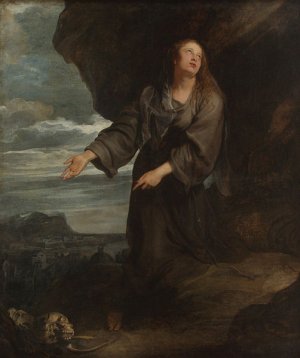