Ognissanti (All Saints) is celebrated on 1st November, and the 2nd of November, commonly called "i Morti" in Italian, is the day dedicated to the dear ones who passed away. People start visiting the cemeteries already some days before, so that on the two festive days fresh flowers, also left on the old forgotten tombs, not visited any more for decades, give to the Italian cemeteries an explosion of colors.

The tradition goes back to early Christianity, when the fathers of the church, seeing that among the country folk some pagan feasts were still very popular, tried to introduce these feasts into the lithurgy. In this way All Saints Day, which honored the early Christian martyrs, was established on the 1st of November to merge with the ancient Druid rituals of October 31st, which was the Eve of New Year's Day in the Celtic calendar, a rite of passage, that is why the return of Dead Ones to the earth. The day of the Dead Ones means a closer dialogue with them, forgetting about everyday problems and looking to them for comfort and strength.

All Souls' Day (Commemoration of All Faithful Departedd) was officially placed on the date of November 2 in the tenth century A.D., practically merging with All Saints' Day, November 1, already a feast from the year 853, and the two days almost overlap in the collective imagination. Among the people old traditions were adapted to the new names of the festivities, and the meaning changed, maintaining however the belief that in those days the dead could return among the living, wandering the earth or visiting living relatives.

The chrysanthemums (whose name in greek means "golden flower") are considered messengers of good, joy and prosperity throughout the world, while in Italy they are associated with mourning and sad contexts. This depends on the fact that the Day of the Dead happens to coincide with the flowering of chrysanthemums in autumn, and that is why in the Italian and partly European civilization it became eventually associated to sorrow and death. This tradition and use for century has made this flower unpopular with many, and presenting bouquet with chrysanthemums would be very bad omen.

In East Asia the chrysanthemum is used for weddings, communions and birthdays; in ancient China only the nobility had the right to cultivate it; when in the 14th century the chrysanthemum arrived in Japan, thanks to its shape associated to the sunrays it became the official flower of the emperor. 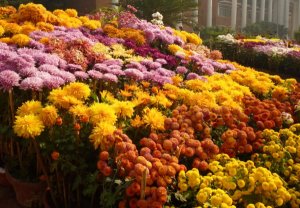 Folk traditions include lighting on the window sills at sunset a "lumino" (red candle) and laying a table for the dear ones deceased who would come and visit and leave the children confetti and greenbeans to teach them that they were keeping an eye on them too (the tradition emphasized the importance of a connection between past and younger generations). Then on November 1st almost everywhere the first "caldarroste" (roasted chestnuts) of the season appeared for the enjoyment of young and old.

Pumpkins and questing for candies and gifts are not a recent U.S. import for the Halloween party, but traditional features of the past, popular in many Italian regions.

In Puglia, at Orsara, on the evening of All Saints it is believed that the souls in Purgatory return to earth, so the Orsaresi decorate the streets of the town with pumpkins ("cocce priatorje"), symbolizing the souls, and lit bonfires of dry branches of broom ("Fuoc acost") to console them. See a video on 1st November at Orsara.

In Sicily there is the custom of preparing gifts and sweets for the children, who are told that gifts are brought by the deceased relatives: parents tell their children that if during the year they were good and recited their prayers for the souls of the dead, these ones will bring them gifts.

In Emilia Romagna in the past, the poor went from house to house asking for "carità di murt", receiving food from people.

In Bormio, Lombardy, on the night of November 2 it was customary to put a pumpkin on the windowsill filled with wine. In Veneto Into the pumpkins were drawn, painted and transformed into lanterns, called "lumere": the candle inside represented the idea of resurrection. Also in Abruzzo pumpkins were decorated, and the kids would go knocking from house to house asking for gifts for the souls of the dead, usually season fruit, dried fruit and sweets.

Throughout Italy it is still possible to find gestures and traditional practices for the celebration of these festivals, traditions that inherited pagan ritual, which survived as superstitions or were transformed and adapted to the Christian religion.

In the cities these traditions have almost disappeared, but in the countryside, and especially in southern Italy, they are still alive. In almost all areas, among the most popular traditions is to prepare a banquet, or just leave a tray with food to the dead.

In some regions it was customary to leave one more seat at the table for the dead that they would return to visit. In Val d'Ossola it was common for the whole family, after dinner, to visit the cemetery and leave the house empty so that the dead could come undisturbed. The return to the houses was then announced by the ringing of bells, to let the visitors leave unseen.

In Sardinia, after the visit to the cemetery and a Mass, families went home for dinner, but did not clear the table, leaving everything intact for any visiting spirits during the night. Before dinner, the kids went around knocking on doors, saying, 'Morti, morti...', receiving cakes, nuts and sometimes money.

In Calabria, among Italian-Albanian communities, there used to be a procession to the cemetery, and after blessings and prayers to get in touch with the dead, banquets were held in the very cemetery.

In Puglia, the evening before November 2, it still customary to lay the table for dinner, with bread, wine and water, especially for the dead, who are believed to come back and visit relatives, and stay at least until Christmas or Epiphany.

In some areas there are sweets and groceries made specially for the Day of the Dead. These foods, even if they belong to the Christian tradition, often have a previous pagan origin. Anthropomorphic cakes and bread for ritual purposes existed already at the time of the Romans. In Sicily there is the "mani" (=hand), a bread shaped like a single arm in a ring that joins two hands, and the "pane dei morti" (=bread of the dead), an anthropomorphic loaf which was originally supposed to be an offer food to the souls of dead relatives.

In Lombardia the "oss de mord" (=bones of the dead) are made in long shapes with dough and almond, baked, with a faint taste of cinnamon. In Comacchio there's the "punghen cmàciàis" (the Comacchio mouse), a cake shaped like a mouse.

The Martorana fruit is a typical Sicilian sweet, similar to marzipan but sweeter and tastier, made with the ground almonds and sugar; its preparation and packaging creates perfect imitations of fruits and sometimes vegetables or fish. The product is included in the list of traditional Italian food products of Sicily.

It was traditionally prepared in the Celebrations of the Dead, and owes its name to the Church of Santa Maria dell'Ammiraglio or della Martorana, built in 1143 by George of Antioch, an admiral of Norman King Roger II in the vicinity of the nearby Benedictine monastery founded by the noblewoman Eloisa Martorana in 1194, from which the fruit took its name; it used to nbe prepared also in the monastery of Santa Caterina in the historic center of Palermo, where the nuns still prepared and sold it until the middle of the 20th century.

According to a well-known tradition, the Martorana fruit was born because the nuns of the convent of Martorana, to replace the fruits harvested from the garden on the trees, created new ones with almonds and sugar, to decorate the convent for the visit of a the pope or another important person.