The second Sunday in May is Festa della Mamma, Mother's Day, in Italy and many other countries, where motherhood and the social importance of mothers are celebrated. The origins of this festivity seem to be linked to the ancient polytheistic peoples who during the month of May celebrated female deities connected to the earth, fertility and life.
In Italy, we are indebted for this celebration to don Otello Migliosi, a parish priest of a small borough of Assisi, Tordibetto, who inaugurated the idea for a Mother's Day on the second Sunday of May of 1957. In memory of this, in 1970 he created a Mother's Park, around a bronze statue depicting Motherhood, a work of sculptor Enrico Manfrini.

Mother's Day was initially fixed on May 8, but in later years it began to be celebrated on the second Sunday in May, as in many other countries around the world. Innumerable songs and poems were dedicated to a Mother. Why not celebrate it this year with the poem 'A Mamma by Neapolitan poet Salvatore di Giacomo (Naples, 12 March 1860 - Naples, April 4, 1934).
Chi tene 'a mamma
è ricche e nun 'o sape;
chi tene 'o bbene
è felice e nun ll'apprezza 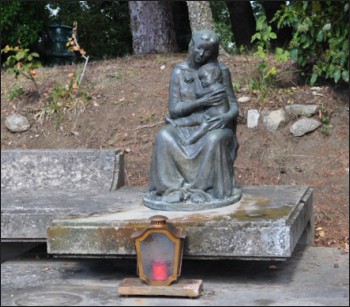 Because a mother's love
Is a wealth
Is like the sea
that never ends.

Even the saddest and vilest man
is still good if he loves his mother.
A mother gives you everything,
seeks nothing from you

And if she sees you cry
without knowing why,
she hugs you and says, "O son!!!"
And cries with you.
ItalyHeritage on Facebook