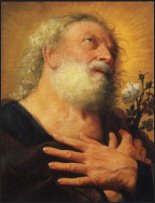 In the Italian South, Giuseppe is one of the most common names - with female counterpart Giuseppina, and short forms Peppino, Pino, Pina, Giusy (a popular modern variation).

In popular tradition the Gospel story of St. Joseph asking for shelter for his wife heavy with child and being rejected by everybody led on this festive day to the tradition of offering food and hospitality to the poorest. The table was blessed by the priest and the poor were served first.

Another tradition of celebrating San Giuseppe on 19 March began in Sicily in the Middle Ages during a terrible drought. People prayed San Giuseppe to help them, and rain came. In gratitude, huge banquet tables were prepared and anybody was invited to eat as much as they wanted.

In many Italian localities the feast was often associated to bonfires and preparing (and eating) zeppole. Bonfires were inherited from pagan rural cults: 19 march marked the end of winter, and fires were made to burn all remains of previous harvests on the fields; youths, feeling the new spring air, jumped beyond the dying fires -- and still today in Italy the tradition of eating the famous zeppole is kept everywhere, and it is a feast for children to prepare them with mothers (and fathers). The religious aspects of the figure of San Giuseppe are examined in the Congregazione di S. Giuseppe - Giuseppini del Murialdo

The Zeppole of San Giuseppe

Among the traditional recipes on this day are the Zeppole, of which there are many variations - Originally fried in "strutto" (pork fat) in most Italian families are now fried in maize or sunflower oil, then rolled in white "semolato" (not refined) sugar - Here is our Abruzzese version, a little less difficult than the traditional Neapolitan recipe:

Preparation: make a fountain with the flour, melt the yeast in slightly warm milk, then join all ingredients into the fountain, mix well and work thoroughly (as for gnocchi) with your hands - the mixture must be of the right softness -- then make long rolls of pasta (25 - 30 cm) and cross them in the form of a ring (like Greek letter gamma) - Then cover all the zeppole with a cloth and let rest in a warm place for at least one hour. Consider that after longer than three hours the beer yeast changes to a bitter flavour. When the zeppole have almost doubled in size, prepare a pan with abundant pork fat or oil and fry on moderate temperature on both sides until slightly brown. Drain of the oil and roll immediately in sugar. After that..... Buon Appetito! (though Monsignor della Casa said it is bad taste to wish that...)