March 11: the official countdown begins to the final High School state examination in Italy and, as every year, the traditions of the "Centogiorni" (the 100 days) is repeated by students in many areas, in many different ways.
There are those (very, very few) who begin to study as hard as they can, those who coudn't care less until about 10 days before the exam, when they'll begin to study night and day, day and night... and a large majority of those seeking to fully enjoy the last moments of freedom, maybe with parties or trips.

In any case, the "monster" is approaching. And the students, as novice knights, decide to exorcise the dragon following traditional rites and performing scaramantic feats.

The most common trend seems to be a "great escape", a trip with friends, just a few days to escape the routine before jumping headlong into the first of the "neverending exams" of life. The money? It must be strictly borrowed from passers-by on the streets. These days, throughout Italian cities, crowds of students go around begging ... for the 100 days!

Every town, every school has its own rites. The most famous is from Pisa: the ritual "touch the lizard" in Piazza dei Miracoli. This bronze lizard with two tails is carved on the central door of the Cathedral, opposite the Battistero, and it is believed it will bring good luck to the student who touches it.

One thing is certain: in the years caress after caress the little creature has taken a leading role in the historic square, making a fine show (with his golden color) on the door that was built by the Florentine architect Raffaele Pagni, for Grand Duke Ferdinando I, after a disastrous fire that in 1595 destroyed the original door created by Bonanno Pisano in 1180. Legend has it that touching the small figures on the left side of the door, a dog, a frog and a lizard, the most beautiful dreams and desires will come true.

The practice is so widespread that, in order to avoid damage, on the day when students flock to Piazza dei Miracoli the lucky reptile is cordoned off! Alternative rites are possible, as doing a hundred laps of a building, climbing a hundred steps, give a hundred kisses or handshakes to strangers.

Very popular is also a trip to the beach - weather permitting: the shoreline becomes a sort of virtual board, where students write the desired mark on the sand and wait for the waves to cancel it. This auspicious ritual can be done in several ways, such as just writing the required mark on the shore, write the mark and throw a handful of salt in the water, write the expected mark increased by 10/100 and so on...

Another very common practice is to spend a night at a pizzeria or restaurant in the company of teachers, even the least sympathetic ones. Students are supposed to offer the dinner, perhaps with the not too veiled intention to "buy" the sympathy of the teachers.

However, religion is not forgotten: hundreds of prospective school-leavers have recourse to the intercession of Saints. Among the most famous rites there is the pilgrimage to the sanctuary of San Gabriele dell'Addolorata, the patron of young people and students, at Isola del Gran Sasso d'Italia, where students have their pens blessed, and wear commemorative T-shirts... wishing for this to be the last year in High School! [Below, a group of students at San Gabriele] 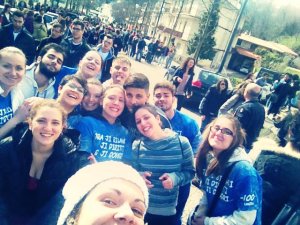