The festivity comes from the tradition that commemorates the martyrdom of the two apostles who came to Rome in the same period and were martyred on the same day, although in different places. 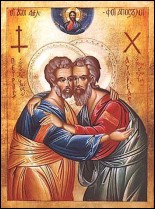 The celebration of the patrons of Rome begins the evening of June 28, in the Vatican Basilica, when the statue of St. Peter is dressed as a pope. Then a number of rituals follow, ranging from the "vesperoni", with the choir of the Sistine Chapel, the blessing of the "palii" held in the niche under the altar of the Confession. There is a solemn Mass in the Basilica of St. Peter and at St. Paul Outside the Walls (Via Ostiense), where a fair is held lasting all night.
The highlight of the festivity is when the Dome of St Peter's is illuminated; once it was done thanks to workers who lowered themselves down with ropes and pulleys down the dome, where they had placed torches and oil lanterns, which they lit up jumping from one to another. Now the same effect is obtained by pressing a button. 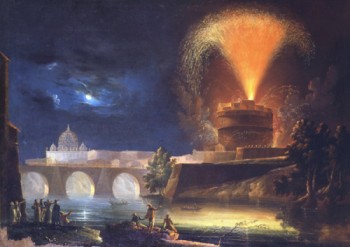 Painting by anonymous of the 17th century
Museo di Roma in Trastevere.

Since 2008 a historical re-enactement was introduced, the Girandola (Pinwheel) of Castel Sant'Angelo, a fireworks show designed by Michelangelo and reworked by Bernini.

The Girandola was an event that attracted spectators from all over Europe, of every rank and social status, a time when Rome returned to shine as a beacon of culture and civilization. An event that gave back pride to the Romans, but that was forgotten for centuries.

The Girandola of Castel Sant'Angelo - documented since 1481 - was recorded in 1550 for the exaltation to the pontificate of Julius III. It was a combination of fireworks studied in drawings by Michelangelo Buonarroti and perfected by Cavalier Bernini, who is said to have taken inspiration from the eruptions of the Stromboli volcano that 'spewed flames and fire'. The great genius of the Neapolitan architect turned this explosion of rockets and lightning fire into an unsurpassable show of colors and art.

The Pinwheel was a great attraction for visitors traveling in Italy until the tradition died out suddenly. This grand fireworks display was achieved thanks to huge machines placed on the top of the castle: through rockets, sparklers and other fireworks fantastic designs are generated that wrap the castle, transforming it into a bright night flower.

The Girandola remained in use until 1886, when it was abandoned because of injuries made by the repeated explosions in the stucco and painted decorations of the rooms and to the archives; it was reported also that to form the cones for gunpowder, in fact, workers did not hesitate to use the documents of the Curia.