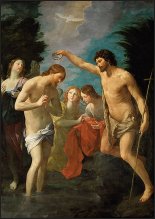 The figure of St. John the Baptist took on many of the meanings of the ancient cults of water and the sun. His religious significance is connected to a rebirth through water, and in many places the day is celebrated with water immersion. June 24th follows almost immediately a moment of great astronomical significance: the summer solstice, when in the Northern hemisphere there is the longest day, and the warm season begins. It is the time of harvest and of Village Fairs.

The life of St. John the Baptist

St. John the Baptist is one of the very few saints (another is St. Joseph) for whom there are two calendar days: his birth is celebrated on 24 June, and his death on 29 August. This day in June was established when the early Christians wanted to oppose the Pagan festival of the Sun: when the Virgin Mary, just after the annunciation, visited her cousin Elizabeth, the latter was already six months pregnant, therefore since Christ's nativity had been placed on 25 December, his cousin John's was established on June 24th. 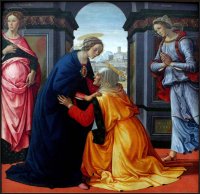 The story of the Baptist is well-known to everybody. The son of Zechariah and Elizabeth, he lived for years in the deserts, eating locusts and honey. In 29 AD he appeared along the Jordan river preaching baptism as pardon of the sins and announcing the coming of the Messiah. Mark's Gospel tells that his arrest was ordered by Herod, whom he had accused of adultery, though the king did not have the courage to have him killed, until his wife Herodias convinces her beautiful daughter Salome to dance for her stepfather Herod, who had promised her whatever she wanted. Salomè asked for the Baptist's head. 29th August is the celebration of the Baptist's "decollatio" (=beheading).

There are many traditions connected to the night of St. John. In Rome youths used to gather before San Giovanni in Laterano and lit bonfires waiting for the arrival of the witches led by Herodias and Salome. The legend goes that Salomè, feeling sorry for the preacher's death, was covering his head with kisses and tears, when from John's mouth a powerful wind came out and drove her into the air, to wander in eternity (a first archetype of a witch).

In Northern Europe bonfires lit on the Eve of St. John's Day were deemed as purifying, and the dew, representing Salome's tears, was believed to be a fecundating force: on that night brides who wanted children sat down on the grass humid with dew. St John's Day comes on the summer solstice, which for the the Babilonyans represented the marriage between the Sun and the Moon, the goddess of waters, who was fecundated by the Sun.

St. John is also the patron of water springs, and it is a custom on 24 June to eat snails, connected to the moon. The animal's horns bring strife, if you bury them into your stomach harmony will follow. In ancient Rome on June 24 there was the feast of Fors Fortuna, the goddess of Chance. The people were forbidden to worship this goddess during the year, but not on that day, a tradition that is also recounted by Shakespeare in "A Midsummer's Night's Dream".

In the Celtic world, the night between June 23 and 24 was also the "witches' night", with witches flying all over the world directed to their annual congress.

History of the Nocino

A very special tradition in Italy, connected to St. John's night, is the preparation of the nocino liquor from unripe walnuts, a custom whose origins are lost in time.

According to Roman historians, the nocino actually was born in Britain. The earliest records are related to the Picts (from the Latin picti, meaning painted) so called by the Romans because they used to paint their skin in blue. The Romans also recorded the strange traditions of these people on June 24, when they drank a very special brew, and they said they could talk with goblins, with elves and goddesses.

Then, when the Romans made Christianity the official religion of the Empire (in 313 AD), these ancient rites, in order to survive, had to be, so to say, translated into the tradition of the Bible and Gospel, that's why they became associated to St. Johm, the Baptist, who, according to the tradition, was born on the summer solstice, six months exactly before Jesus.

The nocino, which was an ancient Druid tradition, became therefore a Christian custom, maintaining however a number of "superstitions" associated to the liquor. The walnuts must be in odd numbers, and must be picked by hand by an expert woman, climbing a walnut tree barefoot, on the night between the 23rd and 24th June. Then the walnuts were left on the grass to become impregnated with the special due of the magical night.

Nothing made of metal must ever touch the walnuts or the liquor, so the walnuts were picked, and then cut into four with a wooden or ceramic knife. The glass jar where the walnuts are placed to brew in the sun must be closed with a lid made with cork. When the liquor is to be filtered, a wooden sieve with a cloth is used.

Until very recent times, on June 24 in villages all over Italy huge bonfires were made, and everyone would gather around them. The purpose was to keep away the witches, that on this night came out of the trees and wanted to steal the walnuts, of which they were very fond. Therefore these bonfires were made near a walnut tree, and the villagers danced around all night.