Cristina, the young daughter of a magistrate, according to tradition, was martyred under the Emperor Diocletian around the year 304. Archaeological discoveries indicate that in Bolsena the veneration of St. Christina, Virgin and Martyr, dates back to at least the 4th century AD, when an underground cemetery existed around the tomb of a female martyr.
Follow ItalyHeritage on Facebook

Most events about her life are based on "The Passion of Santa Cristina" written in the 9th century, so much later than the events, and overly hagiographic. The story tells of an eleven-year-old named Christina, that for her extraordinary beauty was segregated in a tower by her father Urban, an officer of the emperor, in the company of twelve maids. 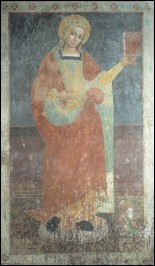 Urban tried to force his daughter to renounce her Christian faith, either by blandishments or beatings, to no avail. Then he locked her up in prison and later gave her to the judges who inflicted her terrible torments, but in prison she was comforted and healed by three angels. Then the judges sent her to the ultimate punishment: with a heavy millstone around her neck, she was thrown into the lake; the stone, however, supported by angels, floated towards the shore. The girl stepped on the stone, where her footprints remained impressed; at that sight, Urban was struck by pain and died. Cristina was led back to prison and other persecutors sentenced her to horrific, but ineffective tortures until she was killed with arrows.

The relics of Santa Cristina

The body of the saint is preserved - according to tradition - in the Cathedral of Palermo, where she is co-patron, in a silvery urn. A relic of the saint was donated by the Diocese of Palermo to the parish church of Santa Cristina Gela in 1991.

But the only authentic relic is a bone of her forearm, preserved at Sepino, in the province of Campobasso. In 1099, at the time of the Crusades, some French pilgrims traveling to the Holy Land, stopped at Bolsena and stole the skeleton of the saint to bring it with them to Palestine; they spent a night in a small village in Molise, Sepino, but they were discovered by locals, and the skeleton of the saint remained in the village. Some of the bones of the saint were donated to privates while, a few decades later, a large part of the skeleton was brought to the cathedral of Palermo, but Sepino kept a bone of her forearm. Later on, the ancient relics brought to Palermo were perhaps stolen again.

The solemnity of Santa Cristina in Bolsena includes, on the evening of 23 July, the celebration of the Eucharist on the tomb of the martyr in the grotto, richly decorated for the occasion with flowers, and the ancient representation in the squares of the town of the "Mysteries", which recreate the legendary passion of the martyr girl.

The 'passion' of Santa Cristina has been a subject of choice by artists of all time, as Signorelli, Cranach, Veronese, della Robbia, who represented martyrdom scenes with her symbols, the wheel, snakes, spears. Below, "Elemosina di Santa Cristina", 1575 - 1585, by Caliari Paolo aka Veronese, kept in Bergamo, Accademia Carrara - Museo 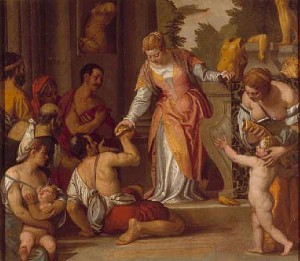 The Millstone and the Eucharistic Miracle at Bolsena 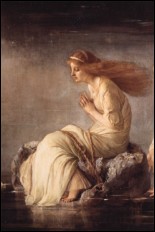 [To the right, a painting by Vincenzo Palmaroli of the 19th century, preserved in the Basilica di Santa Cristina, Bolsena.] In the Basilica of St. Cristina there is an altar, which is traditionally believed to be the millstone of her martyrdom; right on this altar, in 1263 a Bohemian priest who had doubts about the truth of the real presence of the Body and Blood of Jesus in the Eucharist, while celebrating Mass, saw drops of blood gushing out of the consecrated host, which landed on the corporal (a square white linen cloth used on the altar), and on the floor; the event was reported to Pope Urban IV, who was in Orvieto, and established the year after the feast of Corpus Domini.

History of the Cult in Bolsena

Since ancient times pilgrims and devotees flocked to the shrine of the martyr on the day commemorating her death, in the heart of summer. Near the shrine there were inns, and plenty of activities celebrating the event. In 1151 a document confirms the existence of a celebration and a fair of Santa Cristina. In 1272, Gregory X granted indulgences to those who had come to the shrine on July 24 and in 1304 the same was done by Benedict XI, extending it also to the day in May celebrating the inauguration of the Basilica.

Since the 15th century, both festivities were characterized by the carrying in procession of big candles, horse racing, boat racing, wrestling contests, while since the 15th century the fair in July was considered the biggest, most important in the territory.

Cristina was also considered the saint of the lake, whose people contributed to the festivity. Since the 15th century, the fishermen of Bolsena, Marta, San Lorenzo, Montefiascone, Gradoli and Grotte di Castro were required to pay a tax on the fish for the celebrations of the martyr in Bolsena. In the 17th century the feast of May took the name of Santa Cristina dei Fiori, perhaps because it was in the heart of spring, or because the processional machines were covered with flowers.

In the early 19th century the May celebrations no longer existed, and the fair was more limited, but since 1811 a new celebratory event took the place of the ancient spring festival: the procession with the relics of the Eucharistic Miracle of Corpus Christi. To 1814 is dated the first description of the Mysteries on 24 July.

The Mysteries of Santa Cristina at Bolsena

The "Mysteries" are a kind of religious representation common since the Middle Ages, to honor patron saints in various places of Italy.

On the evening of July 23, in the darkened square in front of the basilica, the statue of Santa Cristina, placed on a 'machine' shaped as a small temple, is carried in procession, among a crowd of the faithful, towards the parish church of the Holy Savior, in the upper medieval part of Bolsena, where the statue stops throughout the night.

The procession proceeds through the streets of the town and stops at five squares, where on wooden stages hundreds of Bolsenesi stage silent, living represenrations of the most important episodes of the martyrdom of Cristina.

The subjects have not always been the same in time, and some were added in the last two decades of the 19th century, as the scene of the devils that drag Cristina's father to hell. The most represented episodes are the martyrdom of the rods, the martyrdom of snakes, the boiler, the furnace, the cutting of the tongue, the wheel, the attempted drowning, the killing with arrows.

This happens again the next morning, the 24th, when the liturgical feast of St. Cristina resumes and the image of the Saint makes her return to the Basilica. This event, a relic of medieval sacred drama, since the second half of the 19th century has attracted major scholars in anthropology, theater history and folk religiosity.

Under an ethnographic point of view, the representation of the martyrdom with snakes is very interesting. At one time this scene was performed in Piazza San Rocco then, after World War II, was moved to the larger Piazza San Giovanni. It is the one most rooted in tradition, and the most impressive since live snakes are used, which until recently were captured in the countryside of Bolsena in the days before the festivity. The real star of the scene is the Serparo, who brings the snakes close to the face of the girl, then continues in a parody mimicking the effect of the poison which will lead him to death, until he is saved by the prayer of the martyr.