16 July: Our Lady of Mount Carmel

July 16 marks a very important Marian feast in the Tradition of the Church: Our Lady of Carmel, one of the oldest and most popular devotions from Christianity, linked to the history and spiritual values of the Order of Friars of the Blessed Virgin Mary of Mount Carmel (Carmelites).

The liturgical feast of the Blessed Virgin Mary of Mount Carmel was established to commemorate the apparition to Simon Stock on July 16, 1251, of the Virgin, who gave him a scapular and privileges associated with its devotion.

Simon Stock was then Prior General of the Carmelite order, founded on Mount Carmel in the 12th century: the beauty of this mountain is celebrated in the Bible in several passages in which the prophet Elijah challenged and defeated the priests of Baal, and it was here that, according to tradition, the Holy Family stopped coming back from Egypt.

Celebrations take place all over Italy and the Catholic world. Among the most deeply-felt, is one at Palmi (province of Reggio Calabria) when in November 1894 the statue of the Virgin was repeatedly seen to move her eyes, while there was a seismic swarm that greatly worried the population.

Therefore it was decided to carry the statue on a procession in the evening of 16th November 1894; while almost all the population was in two large squares a disastrous earthquake destroyed the town, but almost all the inhabitants were spared. The miracle was officially recognized by the Vatican. In the photo below, the day after the earthquake. 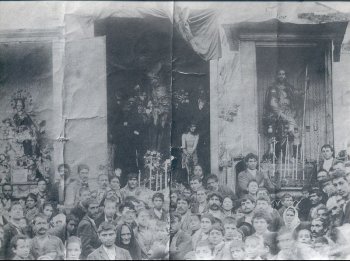 In the painting below "The Virgin Adored by Saints" by Scarsellino (Ippolito Scarsella, Ferrara ca. 1550-1620) presently in the Metropolitan Museum of Art, New York, shows the Virgin bestowing the scapular - a small piece of cloth symbolic of the yoke of Christ - on Saint Simon Stock on 16 July 1251. The old, white bearded hermit might be Eliah. 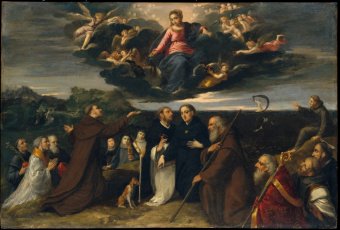