St. Anthony Abbot, born in Egypt in the 3rd century AD, at the age of twenty renounced everything to live as a hermit until 106 years of age, becoming the most famous monk of ancient Christendom, a noble example of an ascetic life of austerity, sacrifice and extreme solitude.
St. Anthony is celebrated on the day of his death, 17 January, in what was one of the most heartfelt celebrations in the rural communities, deeply connected with pre-Christian cults and traditions. Actually, Anthony had little or nothing to do with the rural world: indeed, he was a hermit and among the most rigorous ascetics in the history of early Christianity, the founder of Christian monasticism and the first abbot. 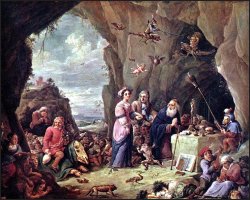 Though he belonged to a rather wealthy family, from an early age he showed little interest in the flattery and luxury of worldly life: to parties and banquets he preferred work and meditation, and on the death of his parents he distributed all his wealth to the poor. He chose to live as a hermit and retired into solitude, to work and pray, at first near his hometown and later in the desert.

Here he spent many years living in an ancient rock-hewn tomb, struggling against the temptations of the devil, who often appeared to him to show what he could have done if he had remained in the world. Sometimes the devil appeared as a ferocious beast - often as a pig - in order to frighten him, but to these temptations Anthony responded with fasting and penance of any kind, always managing to triumph.

His reputation as a hermit soon spread among the faithful and Anthony, who wanted to live totally detached from the rest of the world, was repeatedly forced to change his place of "residence" to escape the crowds of people who flocked to him from all over to get his advice and see him. Around 311 he went to Alexandria to give aid and comfort to the Christians persecuted by Emperor Maximian, and then retired to the Qolzoum mountain along the Red Sea , but had to return to Alexandria shortly after to fight the Arian heresy, more and more widespread in the eastern regions of the empire.

Though he led a hard life, full of deprivation, Anthony was very long-lived: death (which he had predicted) took him at the age of 105, on the 17th of January 355 (or 356), in his hermitage on Mount Qolzoum. On his tomb, now the object of veneration by the faithful, a church and a monastery were built; his relics were brought to Constantinople in 635, then to France between the 9th and 10th centuries. 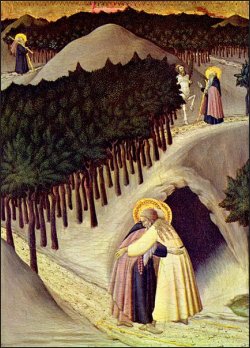 [Painting] Sassetta:
The meeting of Saint Anthony the Great and Saint Paul the Anchorite

Anthony is deeply venerated among country people, since in its earliest centuries the Christian Church absorbed into the feast of this Saint the many agricultural ceremonies connected to the blessing of fields and purification of livestock which used to take place in ancient Rome in January. Also the piglet, a favorite in Saint Anthony's iconography, was a distinctive symbol of Great Mother Ceres.

The saint is considered a protector of cattle - that are blessed during the festival - of swineherds, butchers and charcutiers, and in the past his image was placed above stable doors; Anthony is also the patron saint of bakers, was also invoked to ward off the fire, and not coincidentally his name is linked to herpes zoster, popularly known as "shingles" or "sacred fire". 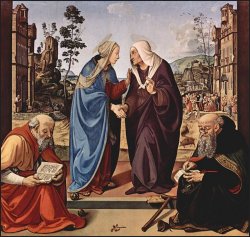 St. Anthony is venerated primarily as a protector of farm animals, and his printed image is found in stables, and the focus of celebrations is the blessing of cattle, a typical ceremony preserved to this day all over Italy in rural areas.

Farm animals, pets, even monkeys and parrots, are brought to the church to have them blessed by the priest. Until 1870, in Rome, the blessing was held in front of the church of St. Antonio on the Esquiline, while now it takes place in front of Sant'Eusebio, where horse-drawn carriages and the festively decorated horses of the Apostolic Palaces are taken in a parade. At Pinerolo, in Piedmont, as well as in other places, the blessing is followed by a "galoppata".

In some places, when the statue of Saint Anthony appears at the door of the church and the stick is shaken to make the bell jingle, or after the blessing with holy water, a horse ride typically begins. The priest who attends the procession receives a pittance and then distributes the "Pani di Sant'Antonio", popularly believed to heal livestock.

St. Anthony the Abbot, as the patron of fire, has a strong link with pre-Christian cultures, especially Celtic and Druidic. As a matter of fact, in Celtic rituals fire was an element of good wishes, for example on the occasion of the feasts of Imbolc and Beltaine; the latter event, which was celebrated on February 1, hailed the imminent end of winter and impending return of the good season, when days are starting to get longer. This celebration each year aimed to set positive forces free and, thanks to the apotropaic feature of fire, to defeat evil and ever-lurking disease.

Fire is one of the attributes associated with St. Anthony, to the point that some disorders characterized by skin rashes as Herpes zoster are still called "St. Anthony's fire". This disease repeatedly stormed Europe between the 10th and 16th centuries, and it was in this period that the belief in St. Anthony's powers against it became widespread. 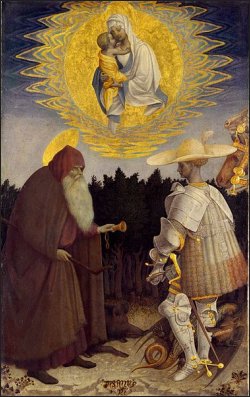 [Painting] Pisanello:
Vision of Our Lady with St. Anthony and St. George
Legend has it that a French gentleman named Gaston prayed the saint at length to heal his son, who was going to die because of this infection. His prayers were fulfilled, and Gaston showed his gratitude by devoting himself to the care of those ailing from the "sacred fire", founding a hospital for them. In 1095 Pope Urban II approved the order of the Antonians, who in later times took on the task of providing aid and assistance to these patients.

Another tradition associated with St. Anthony the Abbot, since he defeated the Devil and the flames of hell, is that of bonfires: huge piles of wood, lit on the forecourts of churches, or on threshing floors. At Fara Filiorum Petri in Abruzzo and some villages in Puglia, bundles of reeds called "farchie" are used instead of wood. Everyone then brings home some burning coal, as a defense against lightning. Always in Abruzzo, groups of young people with masks go around from house to house to sing the "Sant'Antonio": one personifies the Holy Hermit, there is also often a crowd of devils, a temptress girl and an angel that brings comfort.

St. Anthony protector against the devil

St. Anthony the Abbot became very familiar among the lower classes, due to an error in the iconographic interpretation: in the early Christian period, the Saint was depicted fighting with devils, represented in various forms of beasts, or symbolized by a pig. In the Middle Ages, the community raised at the expense of all a pig, which was then killed the following year, on the saint's feast, donating all the proceeds to charity. This tradition is still alive in some areas in Abruzzo and Basilicata.

Once upon a time in Castelbasso, Abruzzo, January 17 was a calendar holiday; in the days immediately before "lu Sand'Andonie" (a ballad on the Saint's life) would be sung through the alleys and before the homes of peasants, who offered products of their work as gifts, while on the evening of the 16th "lu fucarane" (bonfire) was lit. On the morning of the 17th peasants would go to Mass taking their loaves of bread which were blessed and given in small pieces also to farm animals, while making a sign of cross on their right thighs. 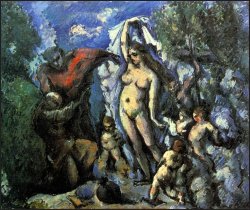 Sr. Anthony in Art and Iconography

In iconography St. Anthony Abbot is represented next to a piglet, often with tongues of fire at his feet and in his hand a stick on whose top a bell is hung; on his robe there is a "tau", the T-shaped Egyptian cross, a symbol of life and victory against epidemics - which also seems to be the meaning of the little bell, used to signal the arrival of people sick with contagious disease. In the centuries, episodes from the life of St. Anthony have inspired many artists, below are listed some of the most famous paintings.
ItalyHeritage on Facebook