A fourth century physician, and bishop of Sebastea, Armenia (now Sivas, eastern Turkey), Biagio was, according the legend, martyred on 3 February 319 AD. He is one of the most popularly venerated saints, by both the Catholic and the Orthodox Church. and in many countries the ritual blessing of the throats with crossed candles is celebrated.
His martyrdom, some years after the granting of freedom of religion in the Roman Empire (313 AD) can be possibly explained with the conflict between Constantine and Licinius, the two brother-in-law emperors, which led to local persecutions, the destruction of churches and death sentences for bishops. 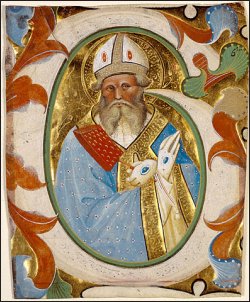 Very little is known about Biagio's life. Most information was passed on orally first and then collected in hagiographies, such as the one by Camillo Tutini (Narratione della vita e miracoli di S. Biagio Vescovo e Martire, Naples 1637.)

He was born in Cappadocia, on the borders of Armenia Minor, in the third century AD. Since childhood he devoted himself to the study of Literature, Physics and Medicine, achieved brilliant results and became famous and beloved in his homeland. For these merits, but especially for his virtues of purity, charity and humility, the clergy and the people of Sebastea acclaimed him Bishop of the city.

Biagio accepted even if he knew that in those days Bishops often became destined victims to sacrifice. Under Diocletian, the Emperor's minister Agricola started a severe persecution against Christians; Biagio visited and encouraged his people, comforting them in prison. On Diocletian's death his successor Constantine seemed to bring peace, but the respite was short due to a dispute between the emperor and his brother in law Licinius who restarted the persecution against Christians in Cappadocia.

The people of Sebastea, concerned about the fate of their Bishop, convinced Biagio to retreat to Monte Argaeus in a deep cave where he lived for some time in solitude, prayer and contemplation. One day soldiers came to his refuge and were amazed at Biagio absorbed in prayer and the beasts of the forest around him in an attitude of reverence. Once back in the city they reported their extraordinary meeting to Agricola, who, realizing that the hermit was certainly the Bishop Biagio, commanded his soldiers to take him immediately nefore him.

Biagio received them meekly and followed them walking towards the city as to a triumph. The news of his capture spread quickly and Christians crowded to its passage. He blessed everyone and the sick were healed. Once before Agricola, Biagio firmly expressed his Christian faith, and at first was severely beaten. During the second meeting, Agricola asked him to worship pagan gods and after Biagio's refusal he ordered a cruel torture: he was suspended from a beam and his flesh was torn with iron carding combs, blood flowing at his feet. Even his torturers were moved, and seven women who had demonstrated their compassion were martyred instantly.

The serenity and strength of Biagio in bearing his torture doubled the wrath of Agricola who ordered him to be thrown into a lake with a heavy stone around his neck. But at the bishop's sign of cross the water became compact ground and he walked on the lake returning to the shore. The judge then accused him of sorcery and sentenced him to be beheaded. He was led out of the city to the execution place, but before his death he thanked God for the martyrdom asking Him to listen to the prayers of those who begged to be healed of throat diseases of and every other illness of soul and body.

A voice was heard from above which ensured that his prayer had been answered in heaven and then Biagio was killed, along with two young boys, the sons of one of the seven women martyred the day before, who wanted to follow their mother to witness their faith. It was the 3rd February in the year 319 AD. During the night, a pious Christian woman of Sebastea, Elisa, buried Biagio's body in a place where later a Cathedral was built, which became a site of miracles and a destination of pilgrimages.

In 732 a part of his mortal remains were placed in a marble urn and shipped to Rome. A storm stopped the ship at Maratea, where the faithful greeted the casket containing the relics - the "sacred chest" and other parts of the body - and kept them in a Basilica, on Mount San Biagio. The chapel with the relics was then placed under the protection of the Royal Clergy by King Philip IV Habsburg, with a royal letter dated December 23, 1629 and since then it has been popularly known by the name of "Royal Chapel".

A large number of places boast of having a fragment of the body of the saint - this is due to the ancient custom of dissecting the bodies of saints and distribute parts to meet the demands of the faithful. 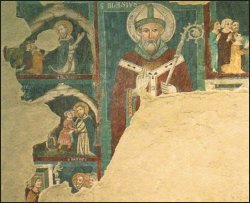 St. Blaise is prayed in his capacity as a doctor, for the healing especially of throat diseases; he is one of the fourteen Holy Helpers, relied upon by Christian people in cases of special need. Devotion to these saints was born in Germany: on September 17, 1445 a Child appeared to shepherd Hermann Leicht at the monastery of Langheim (on the site there is today the Basilika Vierzehnheiligen, located near Bad Staffelstein, in Bavaria). The apparition was repeated with the Child surrounded by lit candles and July 29, 1446, in the same place, this time in the company of thirteen more children. According to tradition, the identity of the Holy Helpers was not revealed and thus the names of the saints belong to later interpretations: Acacio, Barbara, Blaise, Catherine, Ciriaco, Christopher, Dionysius, Giles, Erasmus, Eustace, George, Margaret, Pantaleon, Vitus.

Several miracles were attributed to St. Blaise, the first while he was being led to prison and saved a child who was choking after swallowing a fish bone. During celebrations, in many churches the priests bless the throats of the faithful by imposing two creossed candles; San Biagio is also the patron saint of ENT specialists, wool carders, farm animals and agricultural activities.

In Durres, Albania, in the monastery of San Biagio (Shën Vllas) during the first half of the 20th century, thousands of people witnessed the "miracle of the rock", from which oil with healing properties flowed. This monastery is still a place of pilgrimage for many Albanians, both Muslims and Christians.

Traditions in Italy on 3rd February

Maratea - In the Basilica of San Biagio, right of the Royal Chapel dedicated to the saint, there is an iron cannonball fired by the French guns during a siege of December 1806: on this ball, unexploded, fingerprints are clearly visible which, according to tradition, are the fingers of the right hand of St. Blaise.

Fiuggi - a miracle was reported 2 February 1298 when the town was under siege by the troops of the Cajetani family, who planned to attack from two sides, and therefore divided their forces . San Biagio made fake flames appear that led each of the two groups to believe that the other had now conquered the city, and both left. The day after San Biagio was elected patron of the town, and to commemorate the event to this day there is the tradition of burning large pyramid-shaped piles of wood, called "stuzze".

Salemi, (province of Trapani) - San Biagio is patron with Saint Nicholas since 1542. It is said that in that year the town and the surrounding countryside were invaded by locusts that destroyed crops causing hunger and famine; the inhabitants begged San Biagio, patron of crops and cereals, to deliver them from this evil and these prayers were fulfilled. Since then, every year on February 3 miniature loaves are prepared mixing flour and water: the "cavadduzzi", in the form of locusts and the "cuddureddi", which represent the throat of which St. Blaise is the patron. "Cuddureddi" and "cavadduzzi" are blessed and distributed to the faithful who come to pray the saint and to be blessed by the priest on the throat with lit candles crossed. Since 2008 a costume commemoration of the "miracle of locusts" is performed, with ladies, knights, clergy and commoners in medieval costume walking out of the castle around the old town towards the church of the saint to lay gifts and receive a blessing of their throats.

In the city of Milan there is a tradition to eat together in the family a stale Christmas panettone, specially preserved as a propitiatory gesture against the evils of the throat and colds - accorfing to the saying "San Bias el benediss la gola e el nas". On this day shopkeepers used to offer unsold panettone from the Christmas period at very cheap price.

At Orbetello (GR) on February 3rd the saint is celebrated with fishermen from the lagoon coming to donate their fish. On May 12, there is the "Traslazione" when pilgrims carryong the skull of the saint in a procession on the lagoon from the Church of Ansedonia to the parish of Orbetello.

At Taranta Peligna in Abruzzo, in honor of the patron saint of wool workers, the people of the village prepare the "Panicelle", hand-shaped loaves that are distributed to the faithful.

At Lettomanoppello the priest blesses the throat of the faithful with two crossed candles, and also, according to an age-old tradition, the "tarallucci of San Biagio", small donut-shaped cakes mixed with anise seeds. The tarallucci are then taken home and given to relatives and friends who kiss and eat them to obtain the protection of St. Blaise, particularly from throat and season ailments.