Saint Nicholas of Myra was known in life as the "Saint of Children" because various miracles involving children and young girls were attributed to him; over the centuries, the tradition has given rise to the figure of Santa Claus. The love of the city of Bari for its patron saint, the former Bishop of Myra, has been going on for almost a thousand years. 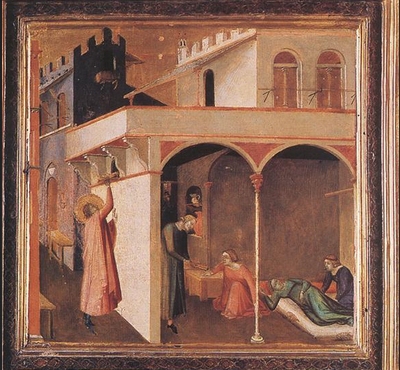 "Storie di San Nicola", one of the four panels grouped into two tables (96x52.5 cm the first and 92x49 cm the second) by Ambrogio Lorenzetti, datable to around 1332 and preserved in the Uffizi Gallery, Florence.

Nicola is a very popular Christian name in Bari, and even the stadium is named after the saint. In the year 1087 sixty-two sailors, merchants and men of faith returned to the harbor with the precious relics of the saint, after having stolen them from Myra, in Lycia, now Turkey, in an expedition promoted by abbot Elias, the archbishop of the city, tu fulfil the alleged wish of Nicholas himself to be buried in Bari.

The event aroused a wondrous enthusiasm among the people of Bari and throughout the Christian world of ity; one hundred years, in 1197 a basilica had been built and consecrated in honor of the saint, which soon surpassed the nearby cathedral dedicated to San Sabino (today to the Assumption), generating a kind of rivalry between the two saints. The ecclesiastical authorities then decided to proclaim San Nicola patron saint of the city and San Sabino co-patron. Every year in Bari two festivities are celebrated in honor of the saint.

On the anniversary of the saint's death, in Bari there is a very heartfelt celebration also by the faithful of Orthodox faith who come in large numbers, especially from Russia and the countries of Eastern Europe. On this occasion in the past, a very peculiar rite took place: the unmarried women of the city walked three times around a column in the crypt of the basilica, touching the reddish marble, which would allow them to marry soon, and the men of the city in search of a wife then waited for the girls outside the basilica. The column was known in the city as "miraculous", and is still in the crypt, although for some time now a protective cage has been installed around and the ancient rite is no longer allowed. 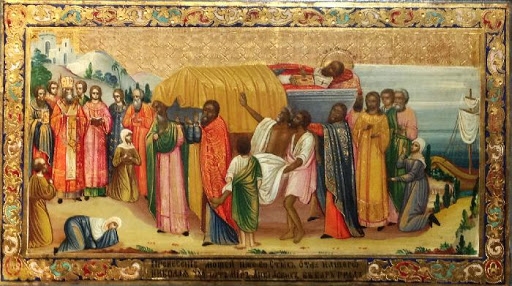 The second feast in honor of San Nicola takes place in May and commemorates the translation of the saint's remains. This is one of the most heartfelt ala over Italy, and a unique opportunity to grasp the essence of this city, its smells, sounds, lights and, of course, flavors. The celebrations begin on 7 May with a historical re-enactement that from the castle of Piazza Federico II di Svevia crosses the old city and reaches the square of the basilica. The procession includes characters in costume, dancers, jugglers, and the "Caravella", a reproduction of the boat that brought the remains of the Saint to Bari. 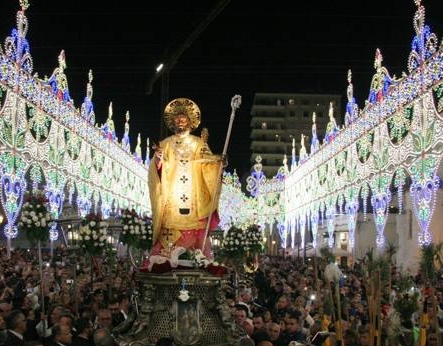 The next day is dedicated to religious liturgy: from 4.30 in the morning in the Basilica Eucharistic celebrations follow one another until sunset. On this day a procession also takes place: the statue of St. Nicholas is transported through the streets of the historic center, then is placed aboard a boat and sails on the waters escorted by a fleet of pilgrims. In the evening it returns to the mainland, and is carried to the Basilica through the alleys of "Bari Vecchia", flooded with lights and colors.

The "Manna" of San Nicola

On May 9, the anniversary of the arrival of the saint's remains in Bari is celebrated and, during the holy mass, the miraculous rite of the "manna" is repeated. Water is collected from the tomb which, according to believers, flows directly from the bones of St. Nicholas.

The manna of St. Nicholas is the water that forms in the saint's tomb and that traditionally had also formed in the Basilica of Myra. Two scholars of the time, Niceforo and Giovanni Arcidiacono, tell that the relics floated in a sacred liquid when the people of Bari stole them. The saint's bones remain closed during the year, and the hole in the marble is only opened on the evening of May 9 in the presence of a large crowd. The block of marble at the base is slightly steep towards the center, which allows the collection of the "Santa Manna".

This liquid, analyzed in 1925 by the Chemistry Laboratory of the University of Bari, is a water of particular purity, the origin of which is explained differently. While for some it is a real miracle and the water would flow from the bones of the Saint or from the marble of the tomb). For others it would be a chemical phenomenon similar to that of a vaporous condensation and in any case a natural phenomenon.

The Dominican fathers, to whom the Holy See has entrusted the Basilica since 1951, have chosen a discreet line. Devotion has not been abolished, as the water that forms in the tomb is actually a relic, having found itself in contact with the bones of the Saint, but it is not encouraged either. The water distributed in small bottles in the Hall of Offerings is not that which formed in the tomb of the Saint during the year, which is usually an average quantity of half a liter, but comes from large bottles of holy water, into which it is poured the "manna" collected on May 9th.

These days the city is closed to traffic, and it can however be reached easily from the train station which is about twenty minutes walk from the historic center. From the station you can walk through the elegant streets of the Murattiano district, which with its boulevards recalls Paris. But even if the event is typically Bari, Bari is a cosmopolitan city and Saint Nicholas loves foreigners, as the local proverb reminds us: "Sande Necóle jè amánde de le frastìre".