Saint Lucia (Syracuse, 283 - Syracuse 13 December 304) was a Christian martyr during the persecutions of Diocletian in Syracuse.

The young Lucia, whose father had died when she was only six, belonged to a rich family in Syracuse and had been promised in marriage to a pagan man. Her mother Eutychia had been ill for years and tried many remedies, to no avail. So Lucia joined her on a pilgrimage to the tomb of St. Agatha, where they prayed for the mother's healing. During the prayer Lucia fell asleep and dreamed of St. Agatha, the child martyr, saying to her: "Lucia, why are you asking me what you yourself can obtain for your mother?" 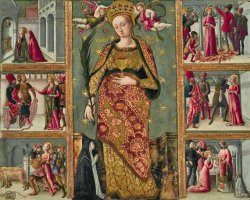 In the vision, St. Agatha also predicted her patronage on Syracuse. Once back home, Eutychia was healed, and Lucia told her mother of her firm decision to consecrate herself to Christ. Her betrothed became suspicious on seeing his promised bride sell all her properties and give them to the poor, and denounced her as a Christian.

The famous trial of Lucia before Archon Paschasius proved her faith and also her pride in proclaiming herself a Christian. Threatened to be sent to a brothel among prostitutes, Lucia said, "The body is contaminated only if the soul consents." The magistrate ordered to carry her there, but her body became so heavy, that dozens of men could not move her. In her answers to the judge Lucia embarrassed the Archon so that, in order to bend her, he used tortures. But Lucia was unharmed, knelt down and was beheaded. Before her death, she announced the end of Diocletian's rule and peace for the Church.

There is no foundation to the medieval tradition that Lucia gouged out her own eyes, before execution. The emblem of the eyes on a cup, or plate, is to be connected to her name "Lucia" coming from the Latin lux (=light). In the iconography the eyes are often accompanied by a dagger stuck in her throat, which derives from another tradition that described her death by "jugulatio" rather than by beheading.

The body of the saint, taken away from Syracuse in ancient times by the Byzantines, was later stolen by the Venetians, who conquered Constantinople (modern Istanbul) and is currently preserved in the church of San Geremia in Venice. The sacred remains of the saint returned exceptionally to Syracuse for seven days in December 2004 on the occasion of the 17th anniversary of her martyrdom. The arrival and departure of the remains were greeted by an amazing crowd, and because of very high participation and devotion, the bishops of the two cities have spoken of a possible permanent return to Syracuse. 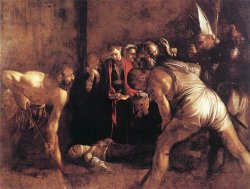 Saint Lucia is the protector of the eyes, of the blind, eye doctors, electricians and masons. There is also a common popular exclamation in Italy, "Oh Santa Lucia!" when you have been long looking for something which is actually under your nose and you finally find it. 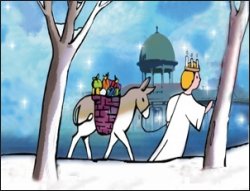 The figure of Saint Lucia, over the centuries, has been a source of inspiration not only religious and theological, but also artistic and literary, both in cultured and folk literature. As part of the literary tradition, the figure of the Lucia inspired Dante Alighieri. The poet (Convivium, III-IX, 15) claimed to have suffered in his youth of a long and dangerous eye disease, then obtaining healing through the intercession of the Saint: for this reason he gave Lucia a key role on his allegorical journey described in the Divine Comedy.

The celebration of the feast on a day near the winter solstice is probably due to the desire to replace the old Celtic festivals celebrating the light in periods close to the winter solstice, as well as other festivities as the Jewish Hanukkah, which lasts eight days as the celebrations for Saint Lucia in Syracuse, Sicily, or the Diwali festival in India.

The missionaries that would settle far from Rome used to christianize the Celtic festivals; as a matter of fact, Gregory the Great had urged his envoys not to eradicate age-old traditions but to divert them to more virtuous practices.

The worship in Sweden

Saint Lucia is celebrated also in other countries, but the cult of the saint in Sweden is of particular interest: here Lucia is venerated by both the Catholic amd Lutheran Church, and enchanting celebrations take place. 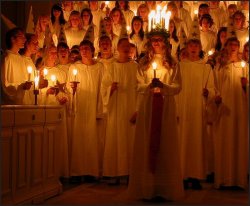 Children prepare biscuits and confectionery, such as muffins with raisins and saffron called lussekatter for December 12th. On the morning of the 13th, the eldest daughter of the family gets up before dawn and dresses with a long white gown tied at the waist with a red belt, the head adorned with a crown of leaves and seven candles to see clearly in the the dark. The sisters wear a white shirt, symbolizing the stars, and men wear straw hats and carry long sticks decorated with stars. The girl dressed as Santa Lucia wakes the other members of the family and serves them biscuits cooked the previous day.

The traditional procession from house to house is accompanied by the Luciasången (song of Saint Lucia), which is none other than the Neapolitan "Santa Lucia" with a Swedish text. Every year a Lucia of Sweden is elected to reach the Sicilian city of Syracuse and participate in the procession of the "Ottava" of 20th December, when the statue of Saint Lucia is returned to the Cathedral.

The Feast of Saint Lucia in Syracuse, Sicily

In Syracuse there was the original tomb of the saint, on which in ancient times a church was built, later rebuilt in the 17th century. Furthermore, there are inscriptions which testify to a remote devotion to the martyr and a liturgical worship already established in the early centuries of the Christian era.

Santa Lucia is the patron saint of Syracuse, where also a miracle is attested by written records for the end of the famine in the year 1646; on Sunday May 13, 1646, a dove was seen hovering in the Cathedral during the mass. When the dove perched on the episcopal throne, a voice announced the arrival at the port of a ship full of grain. The whole population saw that ship as an answer to the many prayers to their beloved "Santuzza".

The Feast of the Patron Saint takes place on 13 and 20 December. It is a very significant celebration, attracting huge numbers of faithful from all over Sicily, as well as delegations of Syracuse communities from other places (especially Argentina and the United States), who return to their hometown especially for this festival. For Santa Lucia the "Cuccìa" is prepared, a typical dessert made from wheat and ricotta with candied fruit and honey.

On December 13, the main day of the festival, in the early afternoon the silver statue of Saint Lucia is carried on shoulder by 60 men called "Green Berets" (from the color of their head covers) out of the Cathedral in Piazza Duomo. The simulacrum is preceded by a "vara" (a Sicilian processional chariot) where containers with relics of the saint are carried by women on shoulder. 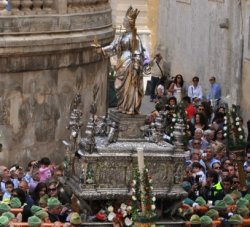 The procession moves down along the Arethusa walkway to "Porta Marina" (next to Porto Grande). Here the statue of Saint Lucia receives the salute of soldiers and sailors who play the sirens of their ships. Then it is carried across the bridge, and proceeds along Corso Umberto and Viale Regina Margherita towards the Borgata of Saint Lucia and the Basilica of "Santa Lucia al Sepolcro". Here the statue enters the church and is placed before the altar where it will remain for the next seven days.

On December 20, a day traditionally called "Ottava" (the eighth) by the Syracusans, the statue of St. Lucia is returned to the Cathedral. The procession starts from the Basilica, makes a first stop at the "Santuario della Madonna delle Lacrime" (Shrine of Our Lady of Tears) where there's an encounter with the statue of Our Lady. A short distance from the Sanctuary there's hospital "Umberto I", and here the procession stops again for a visit to the sick.

Afterwards the procession goes to the island of Ortigia, making a last stop for the traditional fireworks show, and along various streets with final destination Piazza Duomo. The return to the Cathedral is greeted with the final firework shots, and then the silver statue is placed into the niche where it will remain until the first Sunday of May, when the feast of "Santa Lucia re quagghie" (=of the doves) is celebrated with a flight of doves.

Another celebration is Syracuse takes place from April 28 to May 3: the "sweating of St. Lucia". In 1735 the marble statue of Saint Lucia transpired, during the Spanish siege, and there were no dead or injured. At the time some Spanish engineers, in the company of Franciscans, witnessed that the liquid exuding from the hands, feet and face of the statue was similar to human sweat.

According to popular belief the earthquake that struck Syracuse and the surrounding municipalities on 13 December 1990, with an MW of 5.7, did not have disastrous effects due to the intercession of the Holy Patron of the city. On that occasion, despite the emergency, the statue was carried in procession by firemen and since then each year the fire department give change to the "green berets" at the hospital, during the procession of the "Ottava" on 20th December.