San Silvestro and Capodanno in Italy

New Year's Day, that begins immediately after midnight, is known in Italian as "Capodanno" while the Eve, 31 Decenber, as San Silvestro. Here find some of the most common Italian traditions connected with food and celebrations.

New Year's Eve is a pagan holiday with roots back to Babylonians, who usually celebrated the new year at the spring equinox. In 46 BC Julius Caesar ordered the transition to the Julian calendar and the new year was associated with the celebrations for Janus, the main divinity in the archaic era, between 31 December and 1 January.

Starting from 1582, with the introduction of the current calendar by Pope Gregory XIII, the New Year as we know it was set on January 1st as the first day of the year, and with the adoption of the Gregorian calendar in the rest of the world there was total uniformity.

Almost every country and culture celebrates the new year. Italy has its traditions and rituals to bring wealth and banish bad luck: lentils, cotechino, pomegranate, the color red, fireworks, throw the old things away, toasting with champagne.

Italian regional menus for the Cenone 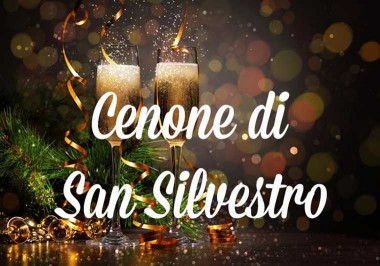 The dinner New Year's Eve (the "Cenone") is rich in traditional courses as lentils with cotechino or zampone; on the table there are walnuts, pomegranate, grapes, ears of wheat and rice as auspicious symbols for a better new year. All these foods have maintained their aura of good luck up to the present day and therefore continue to be great classics.

On the first day of January, after the party and possible hangover, meat is served (pork or lamb), vegetables such as chard and chicory and dried fruit. The reason is always the same, these are foods that promote financial prosperity, health and satisfaction. Fried vegetables and fish are other classics, potato pancakes in the North, the typical crepes in the South.

The first course is often based on fish, such as a classic seafood risotto or traditional marinara spaghetti. But also meat appears, like the Piedmontese "agnolotti al plin", stuffed with meat and also served in broth, or the South Tyrolean dumplings, succulent large bread dumplings with speck and cheese. Other great classics are stewed octopus with potatoes and fried cod, the latter mostly in the South.

Menus almost always include also a salad of radicchio and lettuce, dried fruit, nuts, peanuts and almonds, and the desserts typical of the Christmas period - panettone, nougat, pandoro, together with a quality prosecco. 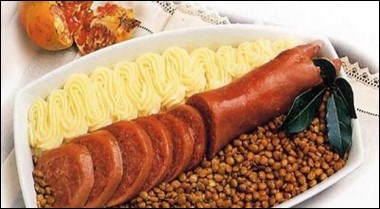 Lentils are the most widespread tradition throughout Italy. Known since ancient times, they have a great nutritional power and owing to their shape are associated to money. Stewed lentils, cooked with a sauté of vegetables, celery, onion and carrot, are widespread throughout Italy, sometimes with tomato sauce in the South or polenta in the North.

An ancient custom was also to give a purse full of legumes on the evening of December 31 with the good luck that they will turn into money. Or lentils can be put in small bags and used as lucky placeholders. Cotechino or zampone. Another sign of abundance associated with lentils is pork (cotechino and zampone), since its fat, nutritious meat also becomes an auspice for a year of abundance and prosperity.

An ancient peasant tradition was for the head of the family to take 12 walnuts, put them in the cupboard and cover them with salt; the next day, the driest or wettest nut would show the month of the new year that was to be the rainier. Always used in rituals as symbols of luck and happiness, walnuts - as well as in general all dried fruit - are never missing on the table of New Year's Eve, to wish joy to the whole company.

The pomegranate is a symbol of loyalty and fruitfulness, thanks to its spontaneity in releasing the red seeds on opening. It is eaten on New Year's Eve with one's partner, boyfriend or husband to wosh devotion and prosperity.

Rice grains are also a symbol of abundance, therefore a good omen for the new year. Rice can be used as an ingredient in dishes for the dinner. 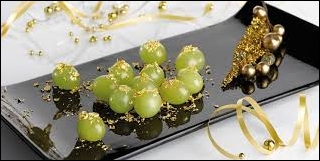 This delicious fruit also symbolizes abundance: in a tradition imported from Spain grapes are the equivalent of lentils and therefore a symbol of luck: at midnight as a good omen 12 grapes should be eaten, as the months of the year. According to an ancient popular saying, "Chi mangia l'uva per Capodanno conta i quattrini tutto l'anno" [=Who eats grapes for New Year counts money all year round] and that is why grapes are a must on the table of the New Year's Eve dinner. 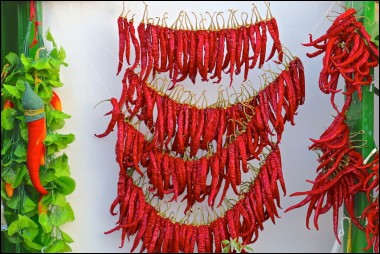 With its red color, the color of the holidays, the chili pepper is a symbol of good luck, also for its shape reminiscent of the lucky charm horn, a typical object of southern Italy. It can be used as a place marker, as a centerpiece decoration or to flavor dishes, from appetizers to chocolate desserts. 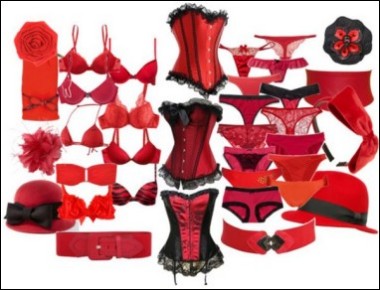 The tradition for both women and men, to wish passion and luck in love for the whole following year is to wear red underwear on December 31st - but beware, it should only be given by others as a present and then discarded the next day! Red is also the color of fertility, for those who might want to conceive a baby within the following year.

Kissing under the mistletoe 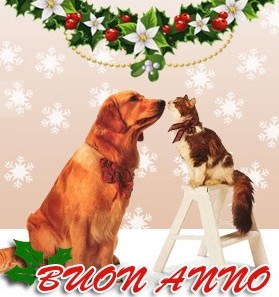 This is one of the most ancient and widespread rituals, which brings luck and protects those who truly love each other. It is linked to the Celtic goddess Freya, who had two children, Balder - the god of the Sun, good and beloved - and Loki, the god of Evil, envious of his brother whom he decided to kill.

Aware of the danger, Freya tried to protect Balder by calling plants and animals to help, but forgot the mistletoe, which Loki used to build a weapon with which he killed Balder. Freya cried days and days in desperation, but her tears, falling on the weapon made of mistletoe, turned into pearly berries that gave life back to her son. Since then, the goddess thanks with a kiss all those who pass under the mistletoe, a symbol of love that defeats death, and protects couples who kiss under this plant.

The toast is now a very common custom and jingling the glass with someone else's is a symbol of friendship, a wish for good luck. The etymology is from the Spanish brindis, derived in turn from the German "bring dir's", meaning "I bring it to you", an expression transmitted by lansquenets to Spanish troops.

The use of inviting people to drink to the health of diners is very ancient and linked to the act of drinking or offering wine in honor of the gods. The custom appears in the Bible, or in the Homeric poems where gods and heroes are represented in the act of drinking mutually "to one another's health". From Greece the custom passed to Rome where the expression "graeco more bibere" (Greek-style drinking) was used to toast to health. With the advent of Christianity, such a widespread use could not be eradicated, and toasts remained to the health of the emperor, armies, the virtue of companions, the integrity of children.

"Cin cin" is the most common exclamation used while toasting in Italy; it originates from the Chinese "qing qing" [please, please], originally used among the sailors of Canton as a form of friendly though playful greeting, then exported to European ports and entered into use also for its onomatopoeic sound similar to clinking two glasses together. Another often used expression is the Latin "Prosit" [may it be to your favour].

To throw old things away - Another custom that has sometimes proved dangerous and which is disappearing and forbidden in most places is to throw away old, broken objects out of the window as a symbol of abandoning what is useless to make room for the new. In the past, in Italy and beyond, this propitiatory rite took the form of throwing useless objects, mosttle dishes, from balconies and windows.

New year's fireworks: Among the noisiest traditions are fireworks, invented in China around the 8th century AD, a symbol of joy and celebration, which in the past with their noise were believed to drive bad spirits away. But we know how dangerous they are for our pets and wildlife... Another thing to throw away?

On New Year's morning, after waking up, it is believed good omen to leave the house with some money in one's pocket; if you meet an elder person or a hunchback, it will be truly a lucky year, because the elder is synonymous of long life and the hunchback of luck. 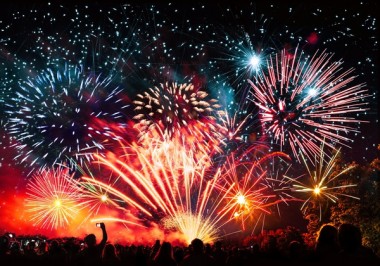