Feast of the Immaculate Conception in Torre del Greco

The Feast of the Immaculate Conception of the Blessed Virgin Mary (the dogma of Mary being conceived free from the original sin) is celebrated on December 8, nine months before the Nativity of Mary, September 8. It is a festive day in many countries, and the patronal feast day of Spain, Korea, Portugal, Nicaragua, Brazil, the Philippines and the United States of America.

The feast was first solemnized as a Holy Day of Obligation on December 6, 1708 under a Papal Bull by Pope Clement XI and is often celebrated with parades, fireworks, processions, ethnic foods, and market fairs in many Catholic countries.

The tradition in Torre del Greco

On December 8, 1861 until December 31, a terrifying effusive - explosive eruption of the Vesuvius and a violent earthquake shook the town of Torre del Greco. The lava was about to destroy the town. 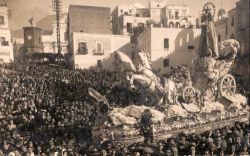 The Torresi made a vow to Our Lady Immaculate, always the object of deep devotion, to carry her image in procession in a triumphal chariot, if the cataclysm had ceased. According to the account of witnesses of the time, the lava stopped suddenly its devastating fury.

Therefore, starting from the following year, 1862, every 8th December, the procession is repeated in memory of the miraculous event, with the construction of a chariot of impressive size with the statue of the prodigious Immaculate and carried in procession through the streets by over a hundred volunteers, to the cheers of jubilation of the crowds in the streets and on the balconies.

In the years, the procession has been enriched with a whole protocol of events and rules for the construction of the chariot.

The triumphal procession is a machine, built in 1862, on which the statue of the Immaculate Conception is placed. Also before 1861 a procession used to take place on 8 December with just the statue. The realization of the "Carro dell'Immacolata", as it is commonly called, starts from a graphic design, usually entrusted to a local artist, and the theme varies from year to year. The project must be adapted to allow the exit from the main door of the church (6 metres high, 3 metres wide); the statue is lifted after the exit.

The first stage of the construction of the chariot is to build the wooden base and the various decorative items, in paper mache, clay or gypsum. Human figures or animals can be included in the project, to enliven the scene, and artifacts used in the past years can also be reused.

The second stage takes place two weeks before the festival in the Basilica of Santa Croce, traditionally in the right aisle, right next to the Chapel of the Immaculate Conception: it is here that the chariot is assembled linking together all the elements previously prepared; when the whole machine has taken shape, the final decorations and painting are completed. Finally, on 6 December the statue of the Immaculate Conception is placed on the chariot.