The veneration of San Rocco, which rapidly spread through Western Europe since the latter half of the 15th century, was officially approved by Pope Urbano VIII in 1629. He is the protector of travellers and of people infected with plague; his relics were repeteadly used in the past when the terrible disease raged through Italy. He is celebrated on August 16, often in association with the Assumption Day.

[this biography is based on the research of Mons. Filippo Tucci of the church of San Rocco - Roma]
The chronology of the Saint's life is uncertain and full of legendaty elements. He was born in Montpellier between 1345 and 1350 and died in Voghera between 1376 and 1379, not older than thirty-two. According to all biographies, his parents Jean and Libère De La Croix were an exemplary Christian couple, rich and wealthy but devoted to charity. Since they seemed not able to have a child, they prayed the Virgin Mary in the ancient church of Notre-Dame des Tables, and their request was fulfilled.

The infant, who was given the name Rog or Rotch, was born with a crimson cross imprinted on his chest. According to his first biographer, who was writing in 1430, around twenty years of age he lost both parents and decided to follow Christ to the end: he sold all his possessions, entered the Franciscan Third Order, put on a pilgrim's clothes, and made a vow to go to Rome to pray on the tombs of the apostles Peter and Paul; he is often represented as a pilgrim, with a walking stick, coat, hat, water bottle and a shell.

It is certain that in July 1367 Rocco was in Acquapendente, a small town on the Via Cassia in the province of Viterbo; here he met with the tragical sight and desolation caused by the pestilence called Black Death. Instead of going on his way and avoiding the contagion, he offered himself as a volunteer to assist the sick people kept in the local lazzaretto, where soon after some sudden miraculous healings took place, after he had traced a sign of cross on the sick.

At Acquapendente he stayed for about three months to help with the epidemic, then headed to the Emilia Romagna where the disease was raging with greater violence; he proceeded from place to place through Tuscany, Umbria and Latium, stopping wherever he found pestilence-stricken people, in order to lend his aid to the hapless victims of the plague.

The arrival in Rome is dated between 1367 and early 1368, when Pope Urban V was just back from Avignon. It is quite likely that Rocco went to the hospital of the Holy Spirit, and here his most famous miracle would take place: he healed a cardinal from the plague after drawing the sign of the Cross on his forehead. This cardinal introduced Rocco to the pope.

Then about 1370-1371 he left Rome and went north, where his presence was recorded in Rimini, Forlì, Cesena, Parma, Bologna. In July 1371 Rocco was in Piacenza, assisting the sick in the hospital of Nostra Signora di Betlemme. Here he became infected with the disease. The plague sign appeared on one leg and, not to burden anybody, he left the town and took refuge in a forest near Sarmato, in a hut near the Trebbia river, to die there in solitude.

There he would have starved, if a dog had not brought him a piece of bread every day and if a miraculous fountain had not sprung out to satisfy his thirst; but God did not allow the young pilgrim to die of the plague, because He needed him to heal and soothe the suffering of His people. Meanwhile, in all places where Rocco had passed and had healed the sick with a sign of cross, his name became famous.

The dog had a rich master, Gottardo Pallastrelli, who, curious about where his dog was going every day, followed the animal, found Rocco and brought him to his mansion until he recovered completely. After that Rocco started his journey to return home.

The events concerning the last years of the saint's life are not verifiable. The legend says that Rocco died in Montpellier, where he had returned, or Angera on Lake Maggiore. What is sure is that, on the way back home, he was involved in the complicated political events of the time, arrested as a suspect and taken before the governor in Voghera. When questioned, to fulfill his vow he would not reveal his name, saying only he was "a humble servant of Jesus Christ". Thrown into prison, he spent five years there living this new challenge as a "purgatory" for the expiation of sins. When death was near, he asked the jailer to bring him a priest, then some miraculous events occurred, which led those present to inform the Governor.

The rumors spread quickly, but when the cell door was opened, Rocco was already dead: it was August 16th of one year between 1376 and 1379. Before he died, the Saint had obtained from God the gift of becoming the intercessor of all the victims of the plague that would call his name, a name that was discovered by the old mother of the Governor or her nurse, that seeing the peculiar vermilion cross on Rocco's chest, recognized him as the Roch of Montpellier.

San Rocco was buried with full honors and on his tomb in Voghera veneration of the young Rocco, a pilgrim from Montpellier, a friend of the humblest, the sick and the poor, immediately began to flourish. In 1414 the Council of Constance prayed the saint for deliverance from the plague that was spreading in the place during the work of the Council.

San Rocco in the Arts and Tradition

Since the Middle Ages, San Rocco has been invoked as a protector from the terrible scourge of the plague, and his popularity is still widespread. His patronage has gradually been extended to the rural world, to animals, to major disasters such as earthquakes, epidemics and serious diseases. In s modern sense, Rocco was a great example of human solidarity and Christian charity, in the name of volunteering. With time Rocco has become one of the best-known saints in the European continent and overseas.

In statues and paintings he is represented as a strong young man, with long beard and a traveller's apparel, a walking stick and a pumpkin or a shell for water, and almost always accompanied by a dog offering him some bread. In the statues San Rocco is always shown as he uncovers the wound on his left thigh, in memory of his disease. This image passed through 600 years' veneration, the wound came nearer to the knee, and changed slightly its meaning from the protection against pestilence to a protection of the knees and junctions.

The traditions related to San Rocco in Italy are innumerable, a non-exhaustive list is on Wikipedia's page

Among the most famous paintings, is a huge (240×190 cm) oil on canvas, dated about 1590, by Antonio Gandino, in the church of Saints Nazaro and Celso, Brescia. The altarpiece polyptich consists of a large central arched canvas, depicting the saint, surrounded by eleven smaller, square paintings, where episodes of Rocco's life are narrated. 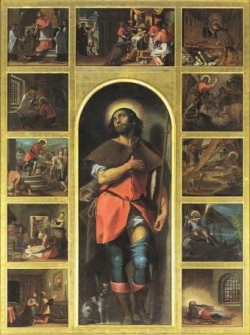