15 August, Ferragosto and the Assumption

On August the 15 both the ancient Roman feast of Feriae Augusti and the Catholic religious festivity of the Assuption of Mary are celebrated.

The term Ferragosto derives from the Latin phrase Feriae Augusti (Augustus' rest): the feast was established by the Emperor Augustus in 18 BC, added to the already existing ancient holidays falling in the same month (the old Sextilis, renamed August in honor of the first Roman emperor), such as the Vinalia and Consualia, which celebrated the harvest and the end of the main agricultural work.

The ancient Feriae Augusti, in addition to self-promotion policy, was intended to connect the major holidays and provide a period of rest, also called Augustali, necessary after the great hardship of the previous weeks.

In the course of the festivities throughout the empire horse races were organized and draft animals - oxen, donkeys and mules - were exempt from work and decked with flowers. These ancient traditions are still alive today, virtually unchanged in form and participation, during the "Palio of the Assumption" held in Siena on August 16. The very name "Palio" is derived from "pallium", the drape of fine cloth which was the usual prize for the winners of horse racing in Ancient Rome.

In the Christian era, since the 4th century AD on this date one of the most important religious holidays has been celebrated, the Assumption of Mary into Heaven, which celebrates the dogma (proclaimed by Pope Pius XII on 1 November 1950) when Blessed Virgin Mary, having completed the course of her earthly life, was elevated to Heaven with her sinless soul and incorrupt body. The popularity of the festivity was accompanied by the large use of the female name Assunta, in honor of Mary, for girls born around the 15 August.

"L'Assunta", a huge oil painting on canvas (690x360 cm), a masterpiece by Titian, dated 1516-1518, is preserved in the Basilica of Santa Maria Gloriosa dei Frari in Venice, where it is placed above the central altar. 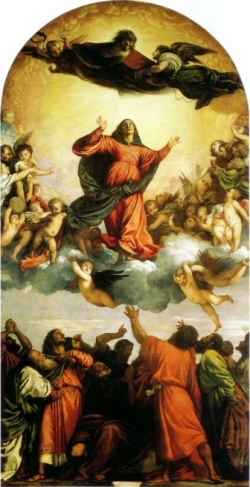 With Christmas and Easter, Ferragosto is one of the days when a lunch is a tradition, the "pranzo di Ferragosto", and also the day after (San Rocco) is usually festive in many areas; Ferragosto is associated to a traditional trip to the seaside or into the mountains, the "gita fuori porta" for the inhabitants of Rome, bonfires on the beach, fireworks on the sea.

The popular tradition of the Ferragosto trip arose in the Fascist period (1923-1943). In the mid-August period, the regime organised, through its recreational groups, hundreds of popular trips, offering also train tickets at hard discounted prices.

The traditional dish par excellence of Ferragosto Lunch is roast pigeon. This custom, once widespread in large areas of Italy, and which still survives in some areas, seems to have originated in Tuscany, in the Carolingian era.

In Sicily there is a traditional dish "gelu di muluna" (= melon frost), a cold dessert decorated with lemon leaves and jasmine flowers.

In Rome, the traditional menu may include fettuccine with chicken livers, stewed chicken with peppers, cold watermelon.

In Stresa special cookies called Margheritine are prepared; they were traditionally offered to guests by Queen Margherita, on the occasion of the August receptions of the Royal House.

In Emilia it is customary to eat small aniseed donuts, as the Biscotto di Mezz'agosto of Pitigliano or the Zuccherino montanaro bolognese of Grizzana Morandi.

The First rule of Ferragosto is however that you do not have to cook on that day, therefore meals are prepared the day before, either to be baked in the morning or consumed cold or at room temperature, and since the lunch usually takes place away from home, all courses must be easy to carry.