On August 5th in many towns and villages of Italy, the Madonna della Neve (Our Lady of Snows) is traditionally celebrated. Over the centuries, Catholics have turned to the Virgin Mary with the most diverse denominations, based on the historical and religious traditions of Christianity, on the words of many saints, the many miracles and apparitions of Mary in the course of history and on the revelations given during apparitions. 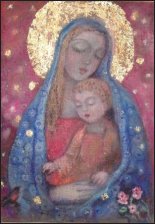 Some of the names most commonly used are: Maria Vergine, Maria Immacolata, Maria Assunta, Maria Ausiliatrice, Maria Consolata; in Italian, it is also common to use "Madonna" (from the Latin mea domina, "my Lady").

The title of Madonna della Neve (Our Lady of Snow) has its origins in the 4th century AD, under Pope Liberius (352-366). In many parts of Italy, in honor of the Madonna della Neve, baby girl names as Biancamaria, or Maria Nives can be given.

The tradition is based on a legend told by friar Bartolomeo da Trento in the first half of the 13th century in Liber epilogorum in gesta sanctorum:
"On the morning of the 5th of August 352 the inhabitants of the Esquiline Hill had a strange surprise: during the night snow had fallen and a soft blanket covered part of the soil. With such a prodigy the Virgin Mary had indicated to a patrician, named Giovanni and his wife, that she wished a temple to be erected in that place in her honor.

For a long time the elderly couple, who had no children, had wanted to use their wealth in a work that would honor the Mother of God, and to that end, they had prayed fervently that She would show them how to fulfill their desire.

The Virgin, moved by their religiosity, appeared to them in a dream, saying that in the place where the next morning they would find snow fallen miraculously overnight, they would have to build a church dedicated to Her name at their own expense.

Excited by the dream and the miraculous snowfall, the next morning Giovanni went to Pope Liberius, to tell him what happened: the pontiff had, during the night, dreamed the same! Liberius, followed by the patrician Giovanni and a large procession of people and prelates, went to the Esquiline hill, and on the still intact snow marked the limits of the new church, which was built at the expense of the patrician and his wife.

The early church was demolished in the 5th century, under Pope Sixtus III (432-440) to be rebuilt more sumptuous, with the name of Basilica of Santa Maria Maggiore, in remembrance of the Council of Ephesus of 431 AD. Actually, the basilica was named "ad Nives" not before the 10th century, and there is no trace of the legend of the snow before that time.

In the 12th century the Feast Dedicationis Sanctae Mariae ad Nives was established and even today in the basilica on August 5, during the celebration of the Mass, white flower petals descend over the altar. 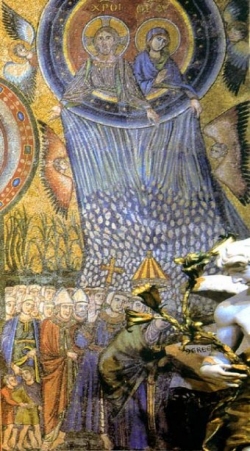 The Basilica of Santa Maria Maggiore is called "ad Nives" in a bull of Pope Nicholas IV in 1288, and to that year date the mosaics by Filippo Rusuti [a detail below], depicting the story of the miracle, still visible today in the 18th-century loggia that covers the original facade.

Since 1568 the official name of the liturgical feast of Our Lady of the Snows was amended in the phrase "Dedication of St. Mary Major" with celebration always on August 5, and the miracle of the snow in August is no longer mentioned, since for the Church it was legendary and never proven. 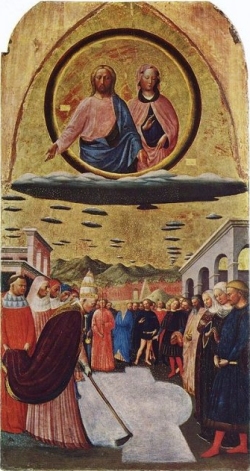 The worship in Italy

The worship of Madonna della Neve increased in the centuries, so much so that between the 15th and 18th centuries there was a wide dissemination of churches dedicated to Our Lady of the Snow, with the establishment of many local celebrations that still involve entire towns and neighborhoods.

Today, just in Italy there are over 150 churches, sanctuaries, minor basilicas, chapels, parishes or fraternities entitled Our Lady of the Snow. Each region has a good number, mostly concentrated in areas where snow is common: 31 in Piedmont, 19 in Lombardy, 17 in Campania. In the province of Naples the worship is very solemn, involving the community with great folk feasts.

In Naples, at the Basilica of Santa Maria della Neve, patron of the city's eastern district of Ponticelli, devotion began with the bull of Pope Leo X of 22 May 1520. The old sanctuary was declared a Minor Basilica on July 27, 1988. For over one hundred years, the solemn procession is carried out with a high waggon, with the statue of the Virgin at top.

In Torre Annunziata, in the Sanctuary of Maria SS. della Neve, the dark terracotta greek-type image of Our Lady of the Snows is greatly venerated. It was found at sea, near the Rovigliano rock, by fishermen between the 14th and 15th centuries, and was given the name of Santa Maria ad Nives, because the discovery had taken place on August 5. The great procession, which involves the entire town, starts from the harbor, after the sacred image comes from the sea in a boat, simulating the original discovery. The Torre del Greco people, known around the world as pasta makers and mariners, are deeply devoted to the Virgin Mary, who saved them from a violent eruption of Mount Vesuvius, at whose feet Torre Annunziata lies, on 22 October 1822.

At Somma Vesuviana the Parish Church of St. Maria Maggiore or della Neve is home to the Brotherhood of Our Lady of the Snow, founded in 1762, whose brethrens carry the statue of the Virgin in a procession. The event is accompanied by the "Festa delle lucerne", which takes place every four years on the days 3,4 and 5 August: along the streets of the medieval borough Casamale, frames of various geometric shapes are placed, each supporting about 50 lamps, so as to give the impression of a sparkling river flowing through the district. The procession is made of groups in traditional costumes, the so-called "months of the year", with the help of pack animals, to represent the various activities of the rural world.