Giorgio Napolitano was born in Naples on 29 June 1925, the son of Giovanni, a lawyer, poet and essayist, born in the village of Gallo, municipality of Comiziano (province of Naples), and Bobbio Carolina, daughter of a Neapolitan family of Piedmontese origin. In 1959 he married Clio Bittoni, born 10 November 1934 at Chiaravalle (province Ancona), from parents who were living there under confinement for their opposition to the Fascist regime. The couple have two sons, Giovanni (born 1961) and Giulio (born 1969) and two grandchildren Sofia (born 1997) amd Simone (born 1999), from son Giovanni married to Darlene Tymo.
Follow ItalyHeritage on Facebook 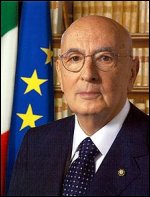 The eleventh President of the Italian Republic, in office since 15 May 2006, he had repeatedly refused invitations to run again, hoping to spend in peace his last years (he will be 88 in June).

In the Italian political stalemate, which gave in the last political elections an unmanageable situation with three practically equivalent parties, and the disastrous collapse in Parliament in the past two days of the various candidates proposed, this morning, Saturday, April 20 2013, representatives of the main political parties (except M5S and Sel who continued to vote for their candidate, prof. Rodotà) and the governors of the regions went to him and begged him to accept the nomination. After a few hours, with a short message and a sad heart, Napolitano, who had already started packing, accepted.

In the afternoon vote he was elected for a second term (the first Italian President ever) with 740 votes out of 996.

"In the awareness of the reasons that were presented to me, and out of respect for the personalities so far proposed in the election of the new Head of State, I believe I must offer the availability that was requested of me. Of course in the talks of this morning, there was no discussion of subjects unrelated to the topic of the election of the President of the Republic. I am moved at this time by the feeling that I cannot escape the assumption of responsibility towards the nation, trusting that there will be a similar collective responsibility."