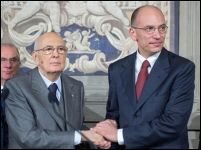 The new Italian government was announced Saturday, 27th April at 17:00. Under the leadership of Premier Enrico Letta, a 47-year-old from Pisa, this is the 62nd government of the Italian Republic, the first of the XVII Legislature after a stalemate of over two months.
Follow ItalyHeritage on Facebook

Christmastime traditions | Events by Region | Events by month | Carnival
The task of forming the government was entrusted to Enrico Letta by the President of the Republic Giorgio Napolitano on 24 April 2013, after having determined that the elections of February 24 and 25 had not given a clear majority. Letta succeded in mediating the differences and was supported by three parties: Democratic Party, Popolo delle Libertà and Scelta Civica. This is the government with most women so far, and the first to include an African American lady. 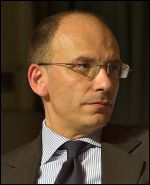 Enrico Letta (Pisa, 20 August 1966), a member of the Democratic Party, is the son of Anna Banchi and Giorgio Letta, a Maths Professor at the University of Pisa, a member of the Accademia Nazionale dei Lincei and the National Academy of Sciences. He is also the nephew of Gianni Letta (a political adversary to Enrico), one of the main collaborators of Silvio Berlusconi's center-right party in the "People of Freedom". The Letta family is originary from Aielli, a village near Avezzano, in the Province of L'Aquila.

He spent part of his childhood in Strasbourg where he attended the high school. He graduated in international political sciences at the University of Pisa. He obtained his PhD in European Community Law at the Scuola Superiore Sant'Anna of Pisa. He is married and has three children. On 24th April he went to receive his nomination from President Napolitano in his own family car, with a baby stroller in the back, which in a way set up a blueprint for a different style in Italian politics, plagued so far with scandals and privileges.

The Letta family, that gave so much prestige to the Marsica, is originary of Aielli. The ancestor, Luigi Letta, married Luisa Ranalletta, and they had eight children. A large family that was to meet a cruel fate. The terrible earthquake of the morning of January 13, 1915 that razed Avezzano to the ground, did not spare Aielli: the Letta house collapsed, Louisa and three daughters were killed. The other children were saved, because they were in a boarding school at Tivoli.

Among the survivors was also Vincenzo, who was then 12 years old. He graduated in law at the University of Rome, and began his training at the De Vincentiis law firm, in Avezzano. Between Vincenzo and the daughter of the De Vincentiis lawyer, Maria, it was love at first sight. The two got married in 1931 and gave birth their eight children: Luigi, Gianni, Giorgio, Maria Teresa, Corrado, Francesca Romana, Cesare and Adriana. [summarized from IlCentro, Abruzzo newspaper].