Areas have been identified in the inland with a high concentration of over-100's, and it was discovered that the male / female ratio in Sardinia is very different from that found elsewhere. If in the rest of Italy and in the western world, the ratio is 1 to 4, sometimes even 1 to 7, on the island it is generally below 1 to 2, and becomes equal in the inner areas. This has led scientists to study the Sardinian population, in an attempt to unravel the secrets of longevity. There have been a number of explanations, such as quality of life or diet, but also specific genetic factors that would interact together with environmental factors.

Silanus, in the province of Nuoro, is a small village in the hills (437m above sea level) with about 2400 inhabitants, among them a considerable number of centenarians and with a ratio significantly in favor of men: one woman every two men. There were also many centenarians until a few years ago and about ten people going to blow out the 100th candle.

In an interview the town's mayor, Antonio Mario Attene, was asked his opinion on the high number of centenarians in his village, whether due to climate, diet or lifestyle. "I think it's a combination of all these factors, but I will not get into a scientific explanation of the genetic causes of longevity, that I'll leave to scientists. I think the type of life is important, without too much stress and conditioning. Our centenarians are people who are used to work in the countryside, mostly as farmers or shepherds. They are simple people, who have always loved to live simply.

They share a long working life, they worked up to eighty years of age. But I think there is another factor with a great influence on their longevity: community life and family, which is strong, enlarged; they have siblings, grandchildren, great-grandchildren, almost three generations around them. The elderly are never alone, they continue to be of great significance in the community, are not closed in elderly homes with other elderly people. They are happy to live and are convinced that it is worth living even if they are weak, just because there is the affection of children, grandchildren, friends."

The geographical position of Sardinia and its mountainous territory, because of isolation, engendered the tendency to marry within the same social group, creating over time special features under the genetic and anthropological points of view. The homogeneity of the Sardinian population, in particular, makes it an ideal study subject to understand the genetic causes of various diseases, including autoimmune diseases, diabetes and multiple sclerosis, but also for research on longevity.

Both objectives are pursued through the study of genetic markers in the population using a multidisciplinary approach involving biology, medicine, statistics, bioinformatics, biotechnology, archaeology, anthropology and paleontology. The intensive research activity is basically covered within two projects: "ProgeNIA" and "Akea".

The Project addresses the Sardinian population for the study of phenotypic traits related to aging, and complex diseases; it began in November 2001 as a collaboration between the Italian CNR (National Research Council), the National Institute of Aging in the United States (which finances it entirely) and the National Institute of Health (NIH-NIA), and involved the active participation of the inhabitants of Lanusei, Ilbono, Arzana and Elini.

The project aims at identifying the genes and environmental factors responsible for aging, and led to the discovery of the existence of a relationship between adiposity, waist circumference and amount of insulin present in the individual. A relationship was identified in the formation of cholesterol, between heredity and environment (which includes diet and lifestyle), where heredity accounts for 40% and enviromnent 60%. And again, it was found that among the elderly longeval inheritance has more weight in women than in men, and that, depending on how a number of life features and health status combine, the influence of genes is triggered earlier or later.

The "Akea" project (Akea is an acronym for "A Kent'Annos" a Sardinian traditional greeting which means "a hundred years") studies the markers of health and longevity among Sardinian people. It grew from studies carried out since 1997 by the team of Prof. Luca Deiana, head of the Chair of Biochemistry Clinic, University of Sassari, with the collaboration of the Max Planck Institute for Demographic Research, Rostock, Germany, and Duke University, North Carolina, USA. Monitoring is done on the entire population of Sardinia. The results of the "Akea" study have been published and presented at various international symposia, and saw the participation of researchers from around the world, arriving in the island to study the DNA of Sardinians, and aroused the interest of mass media.

A Blue Zone identifies a demographic and/or geographic area where people live longer lives, from Dan Buettner's book, "The Blue Zones: Lessons for Living Longer from people who lived the longest." The idea grew out of a research by Gianni Pes and Michel Poulain, who identified Sardinia's Nuoro province as the area with the highest concentration of male centenarians. The two researchers drew concentric blue circles on the map and began referring to the area inside the circle as a "Blue Zone".

Buettner identified longevity hotspots in Okinawa, Japan; Sardinia, Italy; Nicoya, Costa Rica; Icaria, Greece; and among the Seventh Day Adventists in Loma Linda, California, and offered an explanation, based on empirical data and first hand observations, as to why these populations live healthier and longer lives, with a Venn diagram. 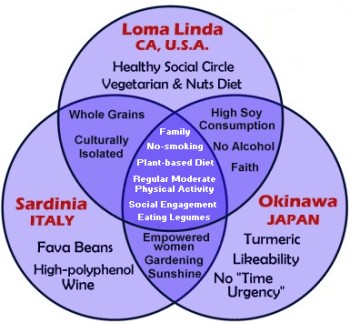 Surnames in the Provinces of Sardegna