The town is situated along the southern slopes of Monte Sirino, on the left bank of the Noce river, a rugged territory of forests and waters included in the Pollino National Park. 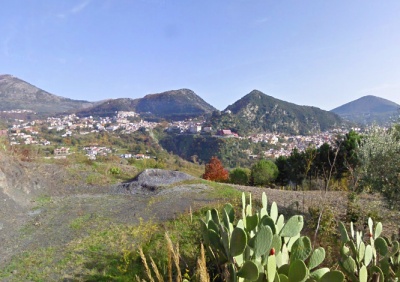 It is divided into Lauria Superiore or Castello, at about 500 a.s.l., the site of a medieval fortified borough, the ancient Lagaria, whose ruins can be seen in the area called Ravita, where according to the tradition was also the castle of Ruggero Lauria. Below there is Lauria Inferiore or Borgo, descending in altitude to about 300 m a.s.l.

The ancient economy was based on a lively crafts sector, which produced ropes, marble, leather. It was called "il paese che cammina" (the walking village) because of the instability of the terrain, which gives easily origin to landslides.

The name of the town is first mentioned in 1079, in the "Bolla di Alfano" where it is called "Uria", so most probably the present name comes from the addition of an article that then became incorporated with the word (La Uria). The original 10th century settlement was established around a Basilian monastery where later rose the Santuario della Madonna dell'Armo. In nearby Ravita the Saracens (Rabit in Arab means nearby place) buolt a castle (the so called Castello di Ruggiero). Since the 12th century Lauria was a Norman fiefdom with a flourishing economy based on crafts and trade, the political center of the whole Valle del Noce. The first Norman baron was Gibel de Loira, followed by Riccardo (1254 - 1266), a loyal follower of Manfred, who died with his king in the Benevento battle against the Anjou. His son Ruggiero was appointed Ammiraglio d'Aragona by king Pietro III and repeatedly defeated the Anjou fleet.

History - from the Renaissance

In the 16th century Lauria was a populous town with 2500 inhabitants, but a serious blow came with the 1655 plague, which killed over one fourth of the population. The town enjoyed a remarkable independence since 1660, when baron Francesco Exarques granted the town the privilege of electing their own mayor. In 1680 Eleonora Exarques died heirless, and the fiefdom was bought by the Dukes Calà di Tappa. In 1735 Charles III Bourbon, appalled by the conditions of Basilicata, ordered a report on all the towns, and at the time Lauria had 6000 inhabitants, a rich prosperous wrought iron sector, and the blacksmiths had specialized in making rifles (they were called "fucilari").

During the French occupation (1799-1811) French general Massena in 1806 invaded the town guilty of rebellion and slaughtered hundreds of people, among them women, children, burning and destroying all public buildings and churches.