Oliveto rises on a long, narrow rock surrounded by deep gorges eroded by two rivers (the Pisciolo and its tributary) that converge to the east, on the slopes of Mount Croccia (an important archaeological area), in the Natural Park of Gallipoli Cognato - Piccole Dolomiti Lucane, an area rich in forests. 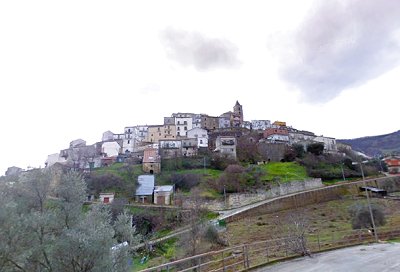 From the 7th century BC the integration of the Greek colonies along the coast and the Lucanians of the inner mountains began. The Achaeans from Metaponto following the Cavone and Salandrella valleys reached Garaguso, then through the creek Pisciolo arrived in the territory of Oliveto Lucano, a site that for its location was a natural outpost to communicate through signals with the town of Croccia-Cognato.

In the 4th century BC Croccia-Cognato allied with the other cities of the mountains (Satrianum, Torretta di Pietragalla, Civita di Tricarico, Anzi) against the Greek colonies, creating strong defenses for their settlements. It is likely that on the highest point of the Oliveto Lucano there was a tower, where today the Cathedral is located.

The foundation of the village is certainly of medieval origin; there was probably some form of specialized oil industry, from which the name is derives. Over the centuries the town was destroyed several times by Saracen invasions and natural disasters (such as an earthquake in 1694).

The first mention of Oliveto Lucano is in some bulls of 1060, 1070 and 1183. In 1150 it was the fief of a certain Marellano, followed in the early 14th century by a Bossati. Charles I of Anjou granted Oliveto Lucano, with Pietrapertosa, to Guglielmo Grappino. In 1382 his descendant Antonio joined a rebellion against the king and lost the feud, but the family must have regained their title later, since in 1400 the lord was Giozzolino Grappino. His granddaughter Violante married Ferrante Diazgarlon, Count of Alife bringing in dowry Oliveto Lucano and Pietrapertosa.

History - from the Renaissance onwards

According to the Numerazioni, the 70 families in 1545 had shrunk to just 34 at the end of the century. In 1669, the families were 58 (over 300 people). At the end of the 18th century the inhabitants were about 700. With the unification of Italy, the poor backward economy of Oliveto Lucano worsened, and emigration reduced the already small community. In the 1960s a second emigration began, with a 33% population decline, which left at Oliveto Lucano only those involved in the traditional activities of agriculture and sheep raising.