Matera is the capital center of the province of the same name, and lies over a small canyon, which has been dug in the course of years by a small water stream, called "Gravina".

Matera was inhabited since pre-historic times, as shown in the "Sassi" (meaning "stones of Matera"). This was a prehistorical (troglodyte) settlement, and is suspected to be one of the first human settlements in Italy.

A memorable chapter on Matera, describing the really poor life of people in the south of Italy at the beginning of the 20th century, is in the book "Cristo si è fermato a Eboli" (Christ stopped at Eboli) by Carlo Levi.

During the 1950s, the government relocated most of the population of the Sassi to the modern city of Matera. People still live in the Sassi today, however. Until the late 1980s this was considered an area of poverty, since these houses are mostly unlivable. In 1993 Matera was included in the UNESCO World Heritage Sites. 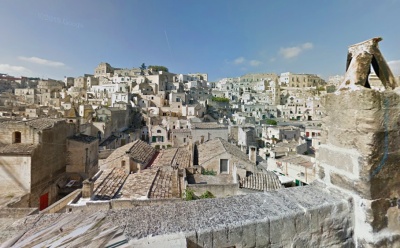