Situated in the hills before the Apennines, halfway between the mountains and the sea, in the west central part of the province. The terrain is varied, with a predominance of "calanchi", gullies excavated in a chalky soil by rainwater flowing down to the valley.

The first traces of human settlements are some tombs dating back to the 8th century BC. It was probably a refuge for the Greeks of Metapontum, to escape the malaria that raged in the valley. It was later a Byzantine settlement, and in the 10th century Byzantine-Italian monks began to introduce agriculture in the area. The first record of the name of the place is in 1060, when the territory was under the authority of Archbishop Arnaldo of Tricarico, who named the village Graculum (= small plowed field).

Erberto, probably a Norman, was the first feudal lord between 1154-1168. In this period the old borough arose, with houses built around the square tower in the center. In 1276 Craco was a Universitas. During the reign of Frederick II, it was an important military outpost thanks to its privileged position controlling the valley of the two parallel rivers, the Cavone and Agri. Its tower, along with other fortifications in the area, was a protective barrier for rich centers such as Pandosia and Lagaria, both beyond the Agri river.

Due to a huge landslide, in 1963 Craco was evacuated and the population relocated to the valley in the village of Craco Peschiera. At the time the center had over 2000 inhabitants. After that, the old borough became a veritable ghost town, and was chosen as set for several films. 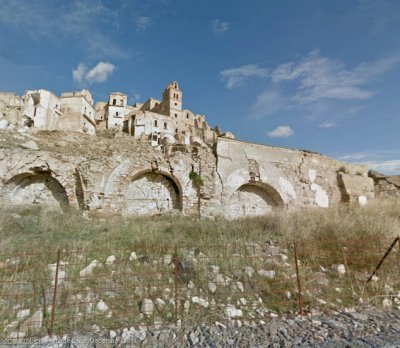