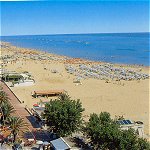 A renowned seaside resort, perfect for a relaxing holiday for families, Roseto degli Abruzzi is located between the two rivers Tordino and Vomano, and strikes the visitor with its fine, late 19th-century villas. Tourism is the main resource today even if there are on the territory also food-processing firms and wineries, as well as the production of cereals, beet roots and wine grapes.

The numerous archaeological findings show that the territory of current Roseto degli Abruzzi was already inhabited in the Roman Age. The most ancient settlement going back to those times is Cologna, today a "frazione" of Roseto degli Abruzzi, which is often mentioned in medieval documents, above all in relation to the presence of the Monastery of San Salvatore in Bozzino.

In the Midle Ages and for centuries Montepagano was the main center in the area. It is mentioned in several documents both for the presence of the Emperor Lotharius and because it was part of the possessions of the Abbey of San Giovanni in Venere. Remains of the ancient medieval fortifications can still be identified in the four entrance doors and in the Romanesque-Baroque belltower built in red bricks, belonging in the past to the now lost church of Sant'Antimo.

In 1251 Montepagano was included in the newly established Diocesis of Atri.

In 1424 the Acquaviva family obtained lordship over the territory of Montepagano, which they were to keep up to the French occupation in 1806 and consequent abolition of feudal rights. Roseto of the Abruzzi officially saw the light as a municipality on 22 May 1860, on the site of a small rural borough called "Le Quote" that rose near the coast in the early 19th century, an emanation of the medieval village of Montepagano located on the top of the hill. Then in 1887, after the inauguration of the railway station, it took the name of Rosburgo: in this period the first hotel was built by enologist Giovanni Thaulero. Very quickly Rosburgo became an established tourist resort and it was one of the first Aziende di Soggiorno in the Region and today 42 beach facilities, 37 hotels, 10 campsites welcome a large tourism with their century-old, local hoteliers' tradition. Only in 1927 the name was changed from Rosburgo to the current Roseto degli Abruzzi, chosen because of the presence of fabulous rosebushes used once to embellish the outside of fishermen's houses.