Pettorano rises along the southern boundary of the Peligna Valley along the road connecting Sulmona to the Cinque Miglia plateau, between the Gizio and Riaccio rivers. Thanks to the rivers, many mills and extravirgin oil plants could rise in the place, and the economy of the area came to be based on coppersmithery, spinning and weaving. The river Gizio forms spectacular gorges amid the high green mountains.

Archeological findings in the area of Mount Genzana show that the area was already inhabited since paleolithic times, mostly by hunters, who later turned into farmers and shepherds and therefore settled permanently in the area. In the Iron Age (VI - V centuries B.C.) there was a flourishing fortified settlement in Monte Mitra. In the area called Vallelarga there are remains of Roman settlements, and a unique epigraphic fragment of the Edictum de pretiis rerum venalium of 301 A.D: by emperor Diocletianus, the only Greek specimen found in the Western area, is still kept in a house in Pettorano. 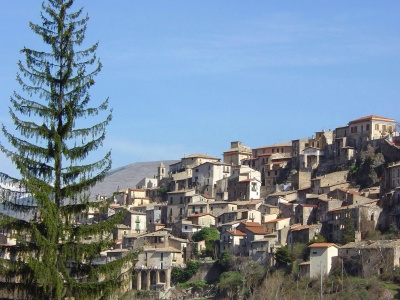 In medieval times the name Pectoranum started to appear in documents. In Norman times the castle of Pettorano was the seat of a large fiefdom occupying the whole Gizio Valley as far as Piano delle Cinquemiglia and the Sangro river, and rose in importance thanks to its strategic position at the entrance of the Peligna Valley. From 1310 to mid-XVIII century the territory was under the rule of the important Cantelmo family, who gave great figures to the history of Southern Italy.

The 16th, 17th and 18th centuries were periods of economic and cultural splendor, still visible in the many palaces built at the time, such as Palazzo Croce, Palazzo Gravina, the Castaldina and Palazzo Vitto-Massei. Important lawyers, notaries and doctors made Pettorano a privileged destination for the populations of the surrounding centres. In the XIX century a great Abruzzese figure, notary Pietro De Stephanis, provided landmark studies in the history of the district and in 1865, and while he was Mayor abolished the death penalty.
Starting from the late 19th and early 20th centuries, the most important event maybe was the massive emigration to South and Nrth America: in the early XX century Pettorano was, after Sulmona and Pratola, the largest centre in the Peligna Valley, with a population of over 5000 inhabitants, five times the present numbers.