A great tourist destination both in summer and winter, Pescocostanzo can fulfill the needs of lovers of nature, art, traditions. The small town lies on the slope of Mont Calvario, on the border of the Piano delle Cinquemiglia plateau.

According to local historian Liborio De Padova in his book on Pescocostanzo (Montecassino, 1866), there are no traces in the area of italic or Roman settlements, and he infers that the Castle rose on a high rock in an area where the cold climate and heavy showfalls discouraged invaders from the sea (Saracens) and the south (Normans), since the founders of the original settlements privileged indipendence above all things. On the high plateau where the village rises four castles were built: the Rocca del Rasino (nowadays Roccaraso), Forca di Palena, Pescocostanzo and Rovisondoli. Pescocostanzo is mentioned by Mutius Phoebonius in his Historia Marsorum for a bloody feud with the city of Sulmona in the year 826 AD. Since by that time the castle must have been in existence already for a couple of centuries at least, prof. De Padova infers that the founders where Peligni tribes that took refuge in the most rugged places to escape from the barbarians who invaded Italy and destroyed Sulmona in 488 A.D. 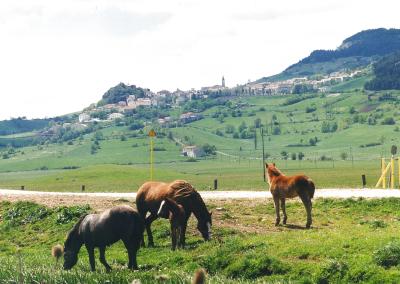 In the 11th century Pescocostanzo is mentioned in an iscription on a bronze door of the Abbey of Montecassino as "Pescu Costantii cum tredecim cellis et villis suis" (Liborio De Padova, Memorie intorno all'origine e progresso di Pescocostanzo). Prof. De Padova also believes that, since there is no mention of a Lord of Pescocostanzo in the very accurate Catalogum Barorum of 1187, the place was independent until the coming of Angevins, when it came under the Cantelmo family, and later under Nicolò di Sangro. In 1454 it is recorded as partly a possession of Giampaolo Cantelmo duke of Sora and in 1461 belonged to the Caldora family. But the greater part of the territory of Pescocostanzo was a Universitas (a community indipendent from feudal Lords), and the many lords that followed one another always respected the privileges and jurisdiction of this centre.

In the 1500's the lordship was for a long time to Vittoria Colonna, wife and for long decades faithful widow of Ferdinando d'Avalos, Marquis of Pescara. Vittoria Colonna was a poetess and a great friend to Michael Angelo, and it is probably thanks to her influence that the arts began to flourish in Pescocostanzo. The economy was based on cattle and sheep raising since early times, and the wealth derived from the cattle trade favoured the development of crafts and arts. The climate made the inhabitants strong, and this led to a great longevity. There is mention of a Rocco d'Alessandro, living there in 1622, who was 120 years old.

The 16th century brought about a wonderful development in arts and crafts, that still today contribute to the great cultural heritage of the place. The "pescolana" is a renowned variation of the "presentosa", the traditional Abruzzese jewel, and the art of tombolo was greatly developed. The inhabitants were also stone carvers and wrought iron workers. On the doors of many ancient houses there are still Latin inscriptions, customized for each family. This great cultural prominence for such a small place can be explained on the fact that Pescocostanzo was a "Universitas", largely independent of feudal oppression, for a very long time of its history, which led to a great pride and welfare for its citizens.

Great names in the history of Pescocostanzo were Davide Coccopalmeri, Archbishop of Malta in the late 15th century; Ottavio Colecchi, a philosopher and mathematician; Benedetto Vulpes, a renowned doctor and scientist. 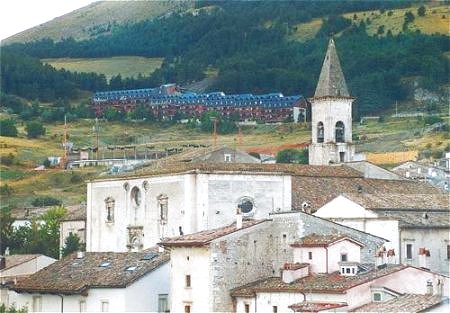