Ofena, 52 km from L'Aquila, enjoys a unique position in the area and for its temperate micro-climate is known as "Abruzzo oven" and is reminiscent of a rich economy connected to the saffron trade. Surrounded by vineyards and olive trees, is a great place for wineries and oil makers. Its ancient population, already flourishing when the Romans invaded and founded a settlement in Aufinum, have brought their rich heritage to thousands of destinations in the world, when a massive emigration started from the place at the beginning of this century. Ofena is a perfect base to visit Abruzzo, almost in the centre of it, between 50 and 80 km from all provincial capitals, and is really worth a visit, with its narrow ancient alleys and palaces, the houses built among the rocks and connected through arches according to a typical defensive plan known as «fortified borough».
Follow ItalyHeritage on Facebook 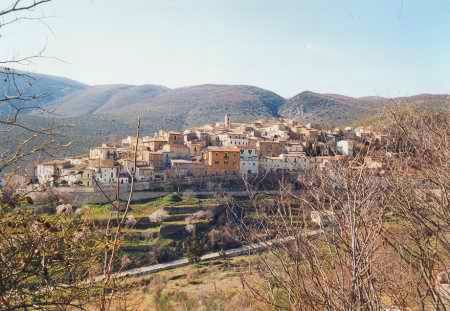 The origins of the place reach further backwards than the Roman occupation. A great Vestine civilization flourished in the area and had among its centres Aufinum, located near the springs of the clear-water Tirino river; the present settlement was probably founded in the VIII century at the same time as nearby Capestrano by former Lombard warriors to cultivate the lands of the then powerful monastery of San Pietro ad Oratorium.

In the 1753 census ordered by King Ferdinand there were 211 fuochi (= families) which according to a conventional statistical calculation gives over one thousand inhabitants. This shows clearly, if compared to the global demographic statistics, that maybe four out of five inhabitants left the place in the course of the 19th and 20th centuries.