Situated on a hill that once dominated Lake Fucino, the largest lake in central Italy drained in the latter part of the 19th century, overlooks now the fertile Fucino Basin. The ancient part is grouped round the castle, where the powerful Counts of Celano lived.

Two important historians of the area, Muzio Febonio and prof. Corsignani, believed that Celano originated from the ancient Equi town Cliternum, but this opinion has since then been demonstrated wrong, when the ruins of Cliternum were found near Capradosso, province of Rieti. Actually the name Celano comes from Cele, Coele, Coelanum and later Caelanum - the name appears in an inscription in the forum of Marruvium (near San Benedetto dei Marsi) in the second half of the 2nd century A.D. and still today there is a little hamlet "Cèle" (territory of Aielli), just left of the famous "Gole". Prehistoric remains date back to 18,000 years ago, as confirmed by the remains of the palafict village today kept in the Archeological Museum in Celano.

In Roman times the vicus Caelanum had an important strategic role, being right on the via Valeria and along the Fucinum Lacum, and maintained a remarkable role also after the fall of the Roman empire, as shown by the Lombard settlements of Secuntiano, Oretino e Porciano. Moreover, the lake came in later times to be known as "Celano Lake". 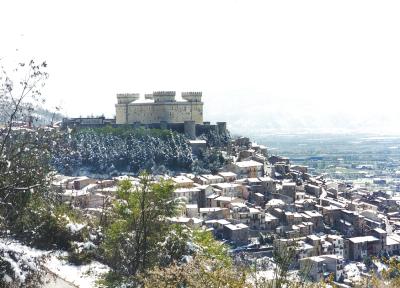 The early medieval town, originally on the top of the Monte Tino, was destroyed in 1223 by Frederick II, and the inhabitants rebuilt their houses where Celano still rises today. The County of Celano belonged to many feudal lords, among whom Lionello Acclazamora, the Piccolominis, the Perettis, the Savellis and lastly Sforza-Cabrera-Bodavillas. As many other centres in the Fucino basin, Celano was heavily hit by an earthquake on 13 January 1915, which claimed thousands of lives in the Marsica and utterly destroyed many centres.

Today Celano is a lively agricultural and industrial center, with modern sports facilities and a growing cultural tourism aimed at the rich artistic and historical past and the natural beauty of the surrounding territory. 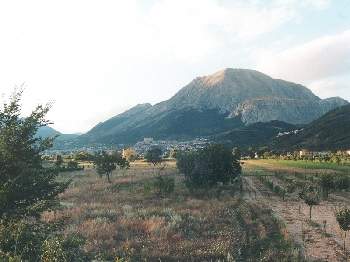