Capestrano lies in the heart of Abruzzo in the fertile valley of the Tirino river. Half of its territory is included in the National Park of Gran Sasso and Monti della Laga. The place is world-famous not only for the celebrated statue of the Capestrano Warrior, but as the birthplace of one of the greatest Franciscan Saints, Saint John of Capestrano (1386/1456).

For the fertility of the lands and the wealth of waters the area was inhabited since antiquity, as shown by many archaeological findings of the neolythic age. In Roman times the area flourished thanks to a busy exchange route from Aufinum (near present-day Ofena) to the Adriatic, which followed the Tirino river and then the Aterno-Pescara probably along an ancient Italic track.

In the Middle Ages there were settlements at Capodacqua, S.Pelagia and Presciano ruled by the monastery of San Pietro ad Oratorium, founded by Lombard king Desiderius in 756 A.D. and preserving relics of St. Peter. In the XI and XII century Capestrano (probably derived from the Latin Caput Trium Amnium, meaning origin of three rivers) rose around a sighting tower as a fortified borough. Feudal lords of the place were ì Bartolomeo di Raiano, Riccardo D'Acquaviva and finally Pietro, Count of Celano. 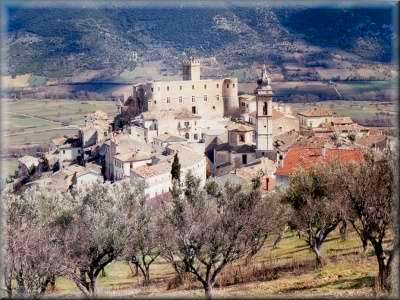 In 1934 a poor farmer, while tilling his vineyard, found the world-famous statue of Italic Warrior of Capestrano. The statue, which probably was a funeral monument of Italic king Nevius Pompuledeius (VI century BC), is nowadays kept in the National Archeological Museum in Chieti. The warrior, without its basement, is 209 cm tall and has a peculiar wide-rimmed cover on the head, a mask on the face and the arms folded on the front part of the body. On the chest and back two round shields protect the heart and he bears an axe and a sword. On the two sides there are small columns, on one of which a mysterious inscription says "MA KUPRI KORAM OPSUT ANANIS RAKI NEVII", which a scholar has translated as "me beautiful image made Ananis for king Nevius Pompuleius". The originality and beauty of the statue have made it the symbol of Abruzzi for the third millennium.