Bominaco is presently part of the municipality of Caporciano, and offers a great view of the Navelli plateau. It is a favourite destination for art lovers, thanks to the presence of the two important churches of Benedictine times. The massive round tower of the castle, on Monte Buscito, (1171 m) built probably as a protection of the settlement, dominates the village.
Follow ItalyHeritage on Facebook 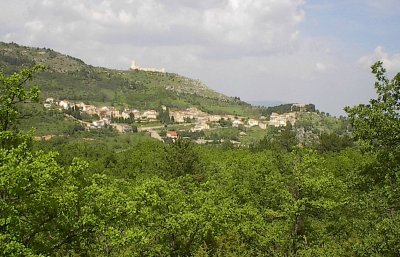 Bominaco is very ancient, and the original name was Momenaco, a Benedictine settlement already in existence in the 10th century AD, on the edge of majestic mountains, which was a center of trade and rest for those who travelled towards the Adriatic coast. The castle of Bominaco took part in 1254 to the building of the city of Aquila, being one of the castles of the valley who joined in the foundation of the new city, as desired by King Frederick II.

Points of Interest: the Castle

The Castle was built probably in the 13th century to defend the monastery of Momenaco and the inhabitants of the village, and also to guard the provisions and the harvest against looters. The stately sighting tower dates back to the 15th century and was built by the Fioravanti Counts of Forfona, to whom pope Martino V had given the patronage of the abbey of Bominaco, since they had helped to defeat the army of Fortebraccio in a battle in 1424, saving in this way the State of the Church from invasion.

The Abbey of Santa Maria Assunta, hidden among trees a little outside Bominaco, together with the Oratorio, was part of the monastic Benedictine center of Momenaco, already existing in the 10th century. Founded according to tradition in 1001 by Odorisius, son of Bernardo di Valva, this abbey is one of the masterpieces of Abruzzi Romanesque architecture. The three imposing apses in the back part are among the most characteristic of the time. The inside is divided into three aisles by seven arches and preserves elements of exceptional artistic value: the abbey desk, the altar and the ciborium, the Easter candelabrum, the ambo, and some fine remaining frescoes. 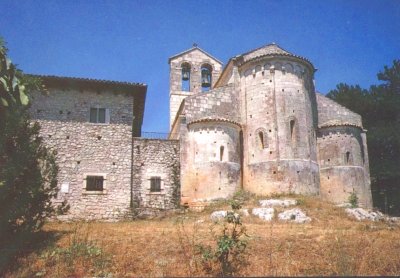 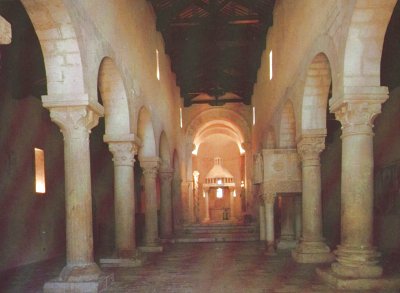 The Oratorio was reserved to the liturgy of the Benedictine monastery. According to tradition, the church was founded by Charlemagne who, as reported in a document of the end of the 8th century, while in Abruzzo at Settefonti, near to the ancient Roman city of Peltuinum, had seen in dream a pilgrim that begged him to complete a church in honor of San Pellegrino, a Christian martyr much beloved in the area. So Charlemagne gave to the abbey of Farfa vast lands, and the Benedictine monks began to build on the site what was to become the monastery of Momenaco. Under a stone on the right-hand side of the altar the body of the saint is said to be buried.

The outside is very simple, irregular, typical of a rather primitive architecture. The inside instead is unique for the marvellous frescoes that covers vaults and walls entirely for over 470 square meters. Two "plutei" in the center of the church, representing a dragon and a griffin respectively, divide the environment into two reserved sectors, as in the early Christian churches, one for the baptizes and the other for the catechumens. The frescoes of the oratory represent episodes of sacred history belonging to four cycles: the Childhood of Christ, the Passion, the Final Judgment, the life of Saint Pellegrino. 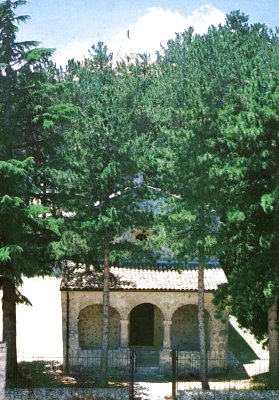 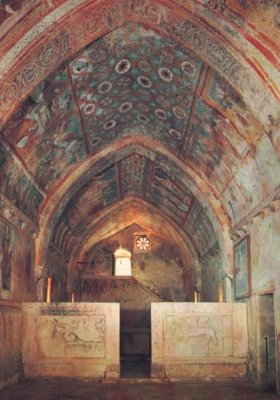