This busy centre lies in a territory of great fertility, a few kilometres beyond Casalbordino and Pollutri, midway between the two important towns of Vasto and Lanciano. The Adriatic is 11 km away, while ski-fields are at 60 km. A small lake in the vicinity allows fishing, and in nearby farms horse-riding can be practiced.

The name appears in the Catalogum Baronum as Sernem, and in the Libro delle Decime (1324) as Castrum Sarnii. The area was rich in human activities in ancient times thanks to the presence of the Great Tratturo, which was trod twice every year by all the large community of Abruzzese shepherds going South to Apulia in early autumn from the mountainous hinterland, and returning in spring, who had a feudal right to stop in a vast area now surrounding Scerni. These ancient, religious shepherd population stopped in the vicinity of the present sanctuary of the Madonna della Strada, which had been erected exacly for these travellers. Scerni was between two main migratory paths: a Northern one, the Lanciano-Cupello route, and a Southern branch, Centurelle - Montesecco.

In the very early Middle Ages (9th century) when barbarians' invasion were over, in the area there were both monasteries depending from the Teate (=Chieti) diocesis and settlements ruled by Lombard lords. A map of the 1031 year shows settlements which can be identified with the now abandoned villages of Materno, Planasi, Sparpaglia and Terra di San Clemente, which depended from the powerful Monastery of Santa Maria di Farfa and later passed under the jurisdiction of Santa Maria di Tremiti.

In 1511 an important document the "Capituli, gratie, immunità et franchitie di Scerni", a kind of municipality constitution with civil laws, was approved by Maria d'Aragona (wife to Alfonso d'Avalos, who was the supreme general of Emperor Charles V's army, and daughter to Ferdinando, illegitimate son to Ferrante I d'Aragona, she was the Marchesa del Vasto and Princess of Montercole).

Until the early 1700's Scerni was of lesser importance than nearby Villaragna. A large part of the territory was still dependent on the itinerant economy coming from the seasonal migration of the shepherds, who had a feudal right to pause and feed their sheep in the fields (this was the "stucco").

When the feudal system was abolished all over the Italian territory in 1806 by the Napoleonic administrations the whole transhumance system received a fatal blow and started to decay, and the wide territory known as the "stucco di Scerni" was given to the peasants. In Scerni meanwhile, already in the mid-18th century the powerful De Risio (later De Riseis, and Barons of Crecchio) family began to acquire properties and lands, as well as importance. The two events brought about the rise to importance of Scerni. 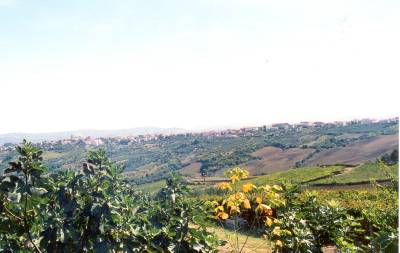